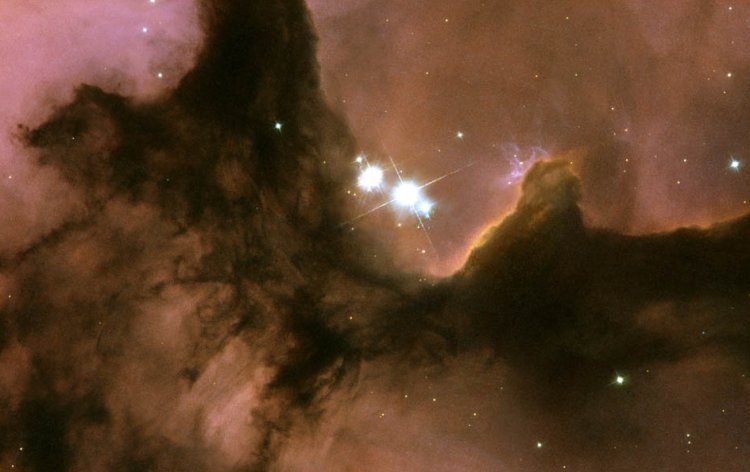 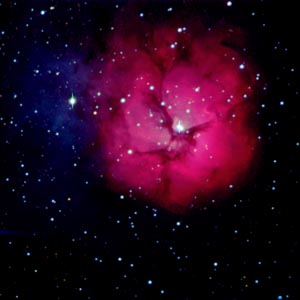 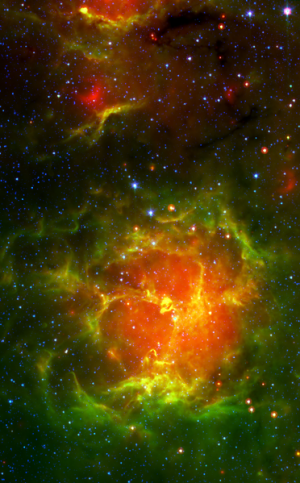 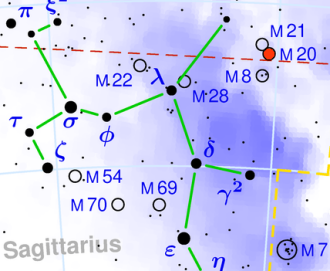 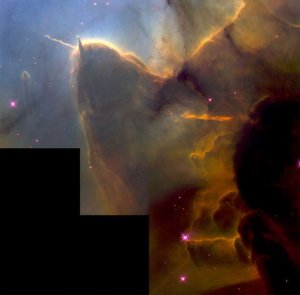 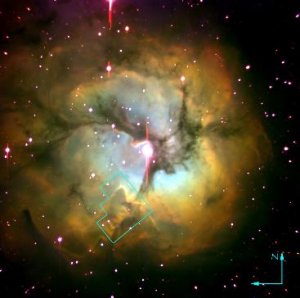 The Trifid Nebula (M20, NGC 6514) is a large star-forming, emission and reflection nebula in the constellation Sagittarius (1.3° north of the ), famous for its three-lobed appearance. It was discovered by Charles Messier in 1764 and named the "Trifid" by John Herschel. The dark nebula which is the reason for the Trifid's appearance was catalogued by Edward Barnard as Barnard 85 (B 85).

The red emission portion of the nebula is illuminated by a young cluster of hot, massive O stars near its center including the triple-star system known as ADS 10991. Component A of this trinary is of spectral type O5 or O6 and has an apparent magnitude of 7.6. Components B and C have magnitudes 10.7 and 8.7, respectively. Surrounding the red emission portion of the Trifid is a blue reflection nebula which is particularly conspicuous to the northern end.

The bright central O stars illuminate a dense pillar of gas and dust, seen to the right of the center of the Hubble image (above), producing a bright rim on the side facing the stars. At the upper left tip of this pillar is a complex filamentary structure. This wispy structure has a bluish color, not because of reflection, but because of emission from ionized oxygen as it recombines.

Star formation is no longer occurring in the immediate vicinity of the central cluster of O stars, because their intense radiation has blown away the gas and dust from which new stars are made. In 2005 the Spitzer Space Telescope, observing at near infrared wavelengths, discovered 30 embryonic stars and 120 newborn stars in the Trifid Nebula which do not show up in visible light.


Stellar jets in the Trifid

A stellar jet – the thin, wispy object pointing to the upper left – projects from the head of a dense cloud and reaches about 0.75 light-years into the nebula. The jet is being blasted out of a young stellar object that is immersed in the cloud and is still growing as it draws in more material from its surroundings. Radiation from the massive stars at the center of the nebula is causing the gas in the jet to glow. But this radiation is also eroding the cloud from which the jet protrudes so that, within the next 10,000 yr or so, it will deprive the young stellar object of the possibility of further growth.

Another nearby star may have already been overrun in this fashion. The Hubble image reveals a finger-like structure pointing from the head of the dense cloud directly toward the stars that power the Trifid. This structure is a prominent example of evaporating gaseous globules (EGGs), which have also been seen by Hubble in the Eagle Nebula. The stalk has survived because at its tip is a knot of gas dense enough to resist being eaten away by the powerful radiation.

Reflected starlight at the tip of the EGG may be due to light from the Trifid's central stars, or from a young stellar object buried within the EGG. Similarly, a tiny spike of emission pointing outward from the EGG appears to be a small stellar jet.


A panel displaying the Trifid Nebula is also fixed to the wall of the starship Voyager's Astrometrics Lab and makes a brief appearance in numerous episodes of Star Trek Voyager, including "Dark Frontier", "Dragon's Teeth", "Night", and "Blink of an Eye".