Some brilliant O stars in well-known regions of star formation. 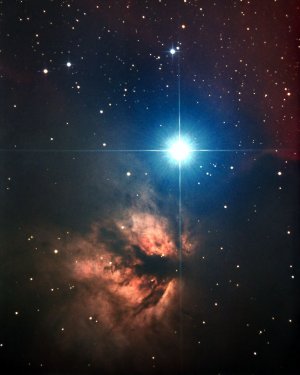 Fig 1. Alnitak and the Flame Nebula.

Fig 2. An evolved O star in the process of losing mass to its 'vampire' companion.

An O star, or O-type star, is a massive, luminous, blue star of spectral type O. O stars have surface temperatures of 30,000°–50,000°C and masses of 20–100 solar masses. Their spectra are dominated by emission lines of singly ionized helium (these lines forming the so-called Pickering series). Most other lines are from at least doubly ionized elements, although H and He I lines are also present.

O stars are powerful ionizers of the surrounding interstellar medium, giving rise to large, bright emission nebulae and virtually defining the spiral arms of the Milky Way and other spiral galaxies. Most O stars are very fast rotators. They have lifetimes, on the main sequence, of only 3 to 6 million yr. Well-known examples include Alnitak (Zeta Orionis), shown in Fig 1, and Naos (Zeta Puppis).

Oe stars have prominent hydrogen emission lines. Oef stars are early-type O stars that show double emission lines in He II at 4686 Å. Of stars are peculiar O stars in which emission features at 4634 to 464 Å from N III and 4686 Å. from He II are present. They have a well-developed absorption spectrum, which implies that the excitation mechanism of the emission lines is selective, unlike that of Wolf-Rayet stars. The spectra of Of stars are usually variable, and the intensities of their emission lines vary in an irregular way. Of stars belong to extreme Population I. All O stars earlier than O5 are Of.

Although O stars make up only a small percentage of all the stars in the Universe, the violent phenomena associated with them mean they have a disproportionate effect on their surroundings. The winds and shocks coming from O stars can both trigger and stop star formation, their radiation powers the glow of bright nebulae, their supernovae enrich galaxies with the heavy elements crucial for rocky-planet-building and life, and they are associated with gamma-ray bursts, which are among the most energetic phenomena in the Universe. O stars are therefore implicated in many of the mechanisms that drive the evolution of galaxies.

A study using the Very Large Telescope, published in 2012, showed that about three-quarters of O stars exist in binary systems with a close stellar companion – a much higher proportion than previously thought.[1] In most cases, it turns out, the two stars are so close that they experience matter transfer and distortion of their shapes, and, in about a quarter of cases, their eventual fate may be to merge, in a violent event, to form a single star.

Where matter transfer takes place, the smaller, lower-mass star which gains mass at its bulkier companion's expense is called a vampire star (Fig 2). The vampire star is given a new lease on life as it sucks hydrogen – rich in fusion energy – from the bloated atmosphere of its neighbor. Meanwhile the victim star, shorn of its outer atmosphere loses the chance to become a red supergiant and instead has its hot blue core exposed to space. The end result is that both stars become more luminous and youthful in appearance. This is an important fact to be aware of when characterizing the evolutionary state of faraway galaxies.