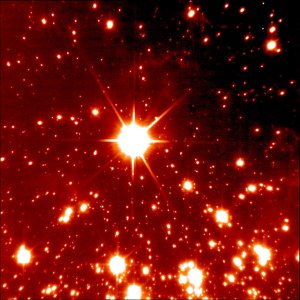 Naos (Zeta Puppis) is a blue supergiant and the second brightest O star in the sky in terms of apparent magnitude. It is embedded in the Gum Nebula and used to be the Zeta star of Argo Navis (Jason's vessel Argos) – the Greek naos meaning "ship" – before becoming Zeta in Puppis, the Stern, after the big constellation was broken up.

Typical of its breed, Naos is blowing a fierce stellar wind, averaging 2,300 km/s and over a millionth of a solar mass a year (10 million times the rate lost by the Sun). This wind has been so well observed at wavelengths from radio wave to X-ray that it has become a major proving ground for stellar wind theorists.

Naos is a classic O-type runaway star, having been ejected at high speed (nearly 100 km/s) from its place of origin in the neighboring constellation Vela. Over the past 1 to 2 million years – much of its brief life – it has covered some 400 light-years. Such stars are invariably single and spin much faster than normal O stars: in Naos's case, at least 220 km/s at its equator (100 times the Sun's rotation speed).