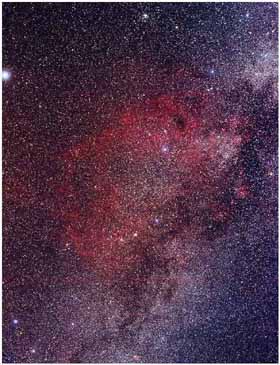 The Gum Nebula (Gum 56) is a vast, almost circular emission nebula that sprawls across nearly 40° of the southern constellations Vela and Puppis. It is so large, yet faint against a bright and complex background, that it is hard to distinguish; its front edge is as close to us as 450 light-years, while its back edge lies about 1,500 light-years away.

The Gum Nebula is believed to be the hugely expanded (and still-expanding, at 20 kilometers per second) remains of a supernova that took place about a million years ago. It contains the Vela OB2 Association, the hot stars of which (among them, Naos) cause it to shine. Also embedded in the Gum are the Vela Supernova Remnant and the Vela Pulsar, though both these are very much younger.

It is named after its discoverer, the Australian astronomer Colin Stanley Gum (1924–1960), who published his findings in 1955.