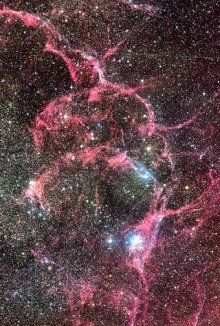 The Vela Supernova Remnant is the expanding cloud of gaseous debris thrown out by a supernova in the constellation Vela that occurred about 11,000 years ago (although this age is uncertain either way by a factor of two). Initially the shock wave from the explosion moved at speeds of millions of km/h, but as the debris from the blast expanded through space it plowed through the gas between the stars, slowing down and formed into intricately shaped and fragmented folds of nebulosity.

The Vela Supernova Remnant now spans about 55 light-years from the site of the explosion. At a distance of only 815±98 light-years it is one of the closest supernova remnants to the Sun – so close that sprawls across more than 5° of the sky.

It lies within the more extensive and much older Gum Nebula. At its heart is the Vela Pulsar. A small portion of the Vela Supernova Remnant is known as the Pencil Nebula (NGC 2736).