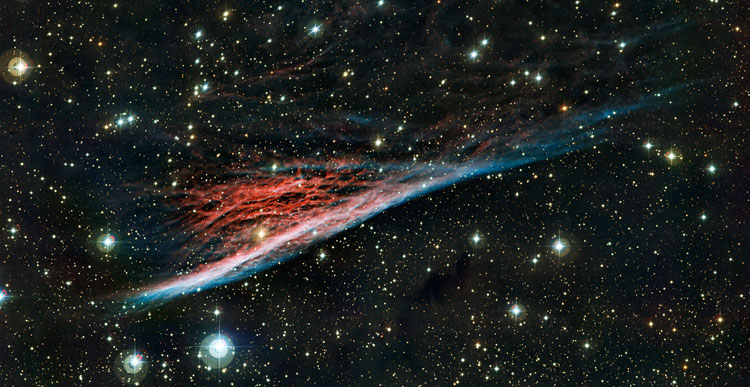 The Pencil Nebula (NGC 2736) is a particularly conspicuous part of the sprawling Vela Supernova Remnant – the widely scattered remains of a massive star that blew apart roughly 11,000 years ago. The narrowest, brightest part of the nebula (formally known as NGC 2736) earns it its popular name; however, the more extended structure bears a closer resemblance to a witch's broom.

The nebula's glow is due to a shock wave from the old supernova having rammed into the interstellar material. At first, the gas would have been heated to millions of degrees, but it subsequently cooled and is still giving off the faint luminosity seen in the image above.

By analyzing the various wavelengths of light in the nebula, astronomers have been able to map the temperature of the gas it contains. Some regions are still so hot that the emission is dominated by ionized oxygen atoms, which glow blue in the picture. Other cooler regions are seen glowing red, due to emission from hydrogen.

The Pencil Nebula, sometimes nicknamed Herschel's Ray, was discovered by John Herschel in 1835 while he was at the Cape of Good Hope, South Africa. He described it as "an extraordinary long narrow ray of excessively feeble light".