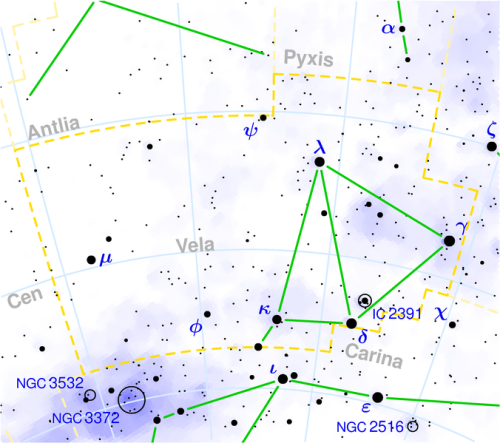 Vela (abbreviation: Vel), the Sails, is a constellation of the southern hemisphere that together with Carina, Puppis, and Pyxis, formed Argo Navis. Vela lies west of Centaurus and north and east of Carina, and occupies a region of sky extremely rich in star fields. See below for details of the constellation's brightest stars and interesting deep sky objects.

The Vela Pulsar (PSR 0833-45) is a pulsar associated with the Vela Supernova Remnant and lying at a distance of about 815 light-years. It is one of the youngest pulsars known and one of the few that has been detected at visible wavelengths. The lengthening of its short period of 89 millisec by 10.7 nanosec per day gives a maximum age of some 11,000 years. In 1977, nine years of its discovery, it was seen to be flashing at visible wavelengths and thus became the second optical pulsar on record, after the Crab Pulsar. It is also one of the strongest radio pulsars, the strongest gamma-ray source in the sky, and a powerful X-ray source associated with Vela X-2.

Vela X-1 is an eclipsing X-ray binary pulsar with an orbital period of 8.96 days. It is a particularly intense emitter of hard X-rays.


Brightest stars and other objects of interest in Vela