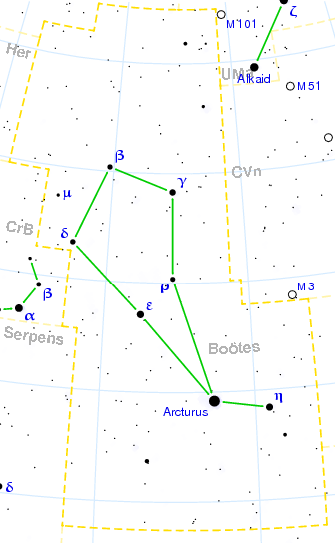 Boötes (abbreviation: Boo), the Herdsman, is a large, kite-shaped constellation of uncertain mythological provenance that is dominated by Arcturus, the brightest star in the northern hemisphere. It borders on Canes Venatici and Coma Berenices to the west, Virgo to the south, Serpens, Corona Borealis, and Hercules to the east, Draco to the north, and Ursa Major to the northwest.

Boötes is the 13th largest constellation in the night sky, occupying an area of 907 square degrees (2.2% of the sky).

Boötes is home to the prototype Lambda Bootis star and also contains Xi Bootis, an easily-seen binary with yellow and orange components of magnitude 5 and 7, respectively, that is also a BY Draconis star. See below for details of the constellation's brightest stars.

Because Boötes lies well away from the plane of the Milky Way it does not contain any bright open clusters. However, within its borders lies the ninth-magnitude globular cluster NGC 5466, as well as many faint galaxies, including the Calwell object C45 and Boötes I (Boötes Dwarf Galaxy). The latter is a very small dim, galaxy, discovered in 2006, which is only about 720 light years in diameter and located about 197,000 light-years away. .

Three meteor showers are associated with the constellation Boötes: the January Bootids, the June Bootids, and the Quadrantids.

NGC 5466 is a globular cluster lying about 51,800 light-years from the Sun and 52,800 light-years from the galactic center. It was discovereed by William Herschel in 1784. NGC 5466 is unusual in containing a number of blue stragglers. It is also the source of a stellar stream (an association of stars that has been torn from a globular cluster or dwarf galaxy an is now stretched out along an orbit of the central galaxy), observations of which have provided valuable data on the shape of the galactic halo.