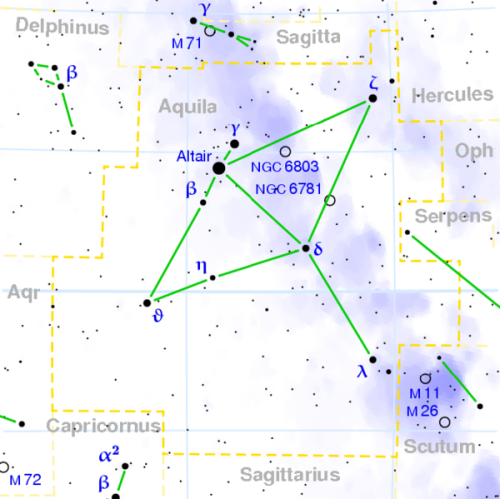 Aquila (abbreviation: Aql), the Eagle (of Zeus), is a distinctive constellation on the celestial equator that spreads across many rich fields. Due to a lane of obscuring dust known as the Great Rift, the Milky Way splits in two through this constellation and also through Ophiuchus.

Aquila has been a fruitful hunting ground for nova-seekers, producing four since 1899, including two of the brightest on record. One of these, in AD 389, became as bright as Venus; the other, in 1918, outshone Altair.

NGC 6751 is a planetary nebula, about 0.8 light-year in diameter, lying at a distance of about 6,500 light-years. It is also known as the Glowing Eye Nebula.