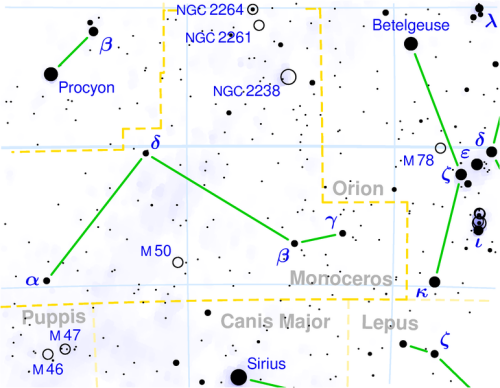 Monoceros (abbreviation: Mon), the Unicorn, is a dim constellation that lies across the celestial equator; it is bounded roughly by a great triangle of brilliant stars: Sirius, Procyon, and Betelgeuse. Monoceros was first brought into general use as a constellation by Jakob Bartsch, son-in-law of Johannes Kepler, and is an area that abounds in open clusters and faint nebulae. Among its most interesting deep sky objects are the Cone Nebula, the Rosette Nebula, Hubble's Variable Nebula (NGC 2261), and the open clusters M50 (NGC 2323), near the border with Canis Major, and the Christmas Tree Cluster (NGC 2244). The Monoceros Loop is a filamentary loop nebula, part of a 300,000-yr-old supernova remnant, about 3,000 light-years away in the galactic plane northeast of the Rosette.

Alpha Mon, an orange giant star, is outshone both in magnitude and interest by its constellation companion Beta. One of the gems of the sky, Beta Mon was regarded by William Herschel as "one of the most beautiful sights in the heavens." Beta is a stunning triple system, consisting of three white or blue-white stars of magnitude 4.5, 5.2 and 5.6. Delta, a magnitude 4.2 blue-white star lying 210 light-years distant, forms a nice optical pairing with a magnitude 5.5 star. Epsilon is an easy double star in small telescopes, its yellow and blue components of magnitude 4.5 and 6.5 making a fine contrast. See below for details of the constellation's brightest stars and interesting deep sky objects.