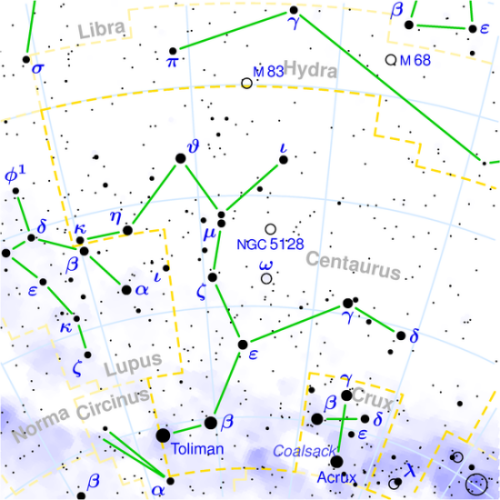 Centaurus (abbreviation: Cen), the Centaur, is a large, bright southern constellation. It is most famous for containing the nearest star to the Sun, Alpha Centauri. A line from Alpha through Beta Cen (the Pointers) leads to Crux, the Southern Cross. See below for details of the constellation's brightest stars and interesting deep sky objects.

The Southern Crab Nebula (He2-104) is a planetary nebula in the constellation Centaurus. At the center of the nebula are two stars: a white dwarf and a red giant, each with a mass roughly equal to that of the Sun. The red giant star turns out to be a Mira variable, a pulsating star that is dumping material into an accretion disk surrounding the white dwarf. It is thought that when enough mass falls onto the white dwarf, a thermonuclear explosion occurs creating another expanding hourglass-shaped nebula. The photograph shown here was taken with the WFPC2 instrument onboard the Hubble Space Telescope. The hourglasses from the two most recent explosions are visible with the last one highlighted in the inset.

Thackaray's globules are dark globules associated with the bright star-forming region IC 2944, which lies about 5,900 light-years away, in Centaurus. The largest of these globules, first spotted by South African astronomer A. D. Thackeray in 1950, is likely two separate but overlapping clouds, each nearly 1.4 light-years (50 arcsec) along its longest dimension. Combined, the clouds contain about 15 solar masses of material. IC 2944, the surrounding HII region, is filled with gas and dust that is illuminated and heated by a loose cluster of O-type stars.

The Centaurus Cluster is a cluster of hundreds of galaxies whose center lies only 170 million light-years away in the constellation Centaurus. Like other large clusters of galaxies, it is filled with gas at temperatures of 10 million K, making it an extended, luminous source of X-rays. The brightest individual member is the 11th magnitude elliptical NGC 4696. Together with the IC 4329 Cluster and Hydra I, the Centaurus Cluster is part of the Hydra-Centaurus Supercluster.

The NGC 5128 Group is a neighboring group of galaxies in Centaurus that is dominated by the large lenticular galaxy NGC 5128 and by two spiral galaxies, M83 and NGC 4945. NGC 5128 is one of the brightest nearby galaxies and is a powerful source of radio waves, known as Centaurus A by radio astronomers.