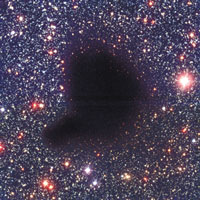 A globule is a small, dense, round cloud of dust and gas that absorbs radiation and appears as a black blob when seen against the background of a bright nebula or star field; also known as Bok globule after Bart Bok who first drew attention to them and suspected they might be protostars. Their exact status, however, remains unclear. While it is generally assumed they are the cores of fragments of molecular clouds that are in the process of collapsing to form individual stars, they could also be fragments that have become hung up by a combination of internal magnetic and turbulent pressure and are failed star-forming cores.

Globules are the smallest and most regular features of the interstellar medium. Typically they have a mass of 20 to 100 solar masses and a diameter of 1 to 2 light-years across. Having no internal heat source, globules are, surprisingly, among the coldest known naturally-occurring phenomena with a temperature only a few degrees above absolute zero.