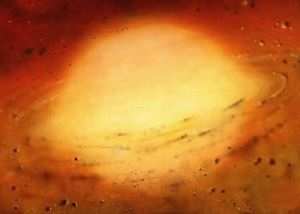 A protostar is a stage in the evolution of a young star (see star formation) after it has fragmented from a interstellar gas cloud but before it has collapsed sufficiently for nuclear fusion reactions to begin. It may last from 100,000 to 10 million years, depending on the mass of the star. A protostar is surrounded by a dense cocoon of gas and dust that blocks visible light, but allows through large amounts of far infrared and microwave radiation.

A protostellar core is the smallest opaque clump into which a collapsing interstellar cloud fragments. The characteristic mass of a protostellar core is about 0.01 solar mass. It subsequently grows by accretion as surrounding matter falls toward it, attaining stellar mass, and becoming a protostar, within 100,000 years after its initial formation.