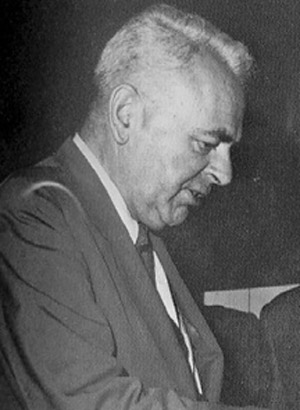 Bart Bok was a Dutch-born American astronomer famous for his studies of star-forming regions and of the structure of the Galaxy.

Educated at the Universities of Leiden and Groningen, Bok worked at Harvard University from 1929 to 1957, and for the next nine years directed the Mount Stromlo Observatory in Australia. In the early 1940s he helped set up the National Observatory of Mexico at Tonantzintla, and a decade later did a similar job for Harvard's southern station in South Africa. In Australia he helped establish the Siding Spring Observatory. The latter part of his career was spent at the University of Arizona, where he directed the Steward Observatory from 1966 to 1970.

Working closely with his wife, Priscilla Fairfield Bok, he studied the structure and evolution of star clusters and the Galaxy, mapping the spiral arms of the Milky Way, especially in the Carina region, and the Magellanic Clouds. Bok initiated radio astronomy at Harvard and promoted it elsewhere. His investigations of interstellar gas and dust led to studies of star formation, and he became known for his work on small dark nebulae now called Bok globules. He was an important teacher, writer, leader, and popularizer of astronomy.