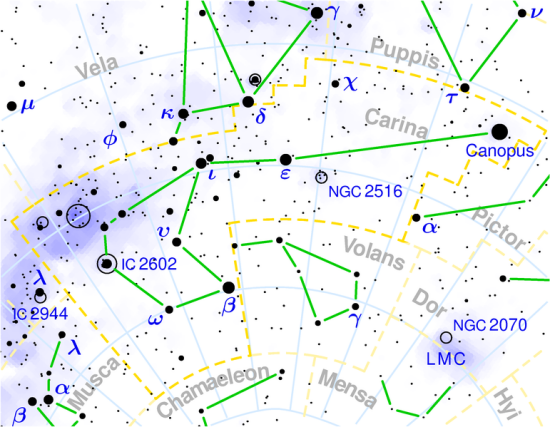 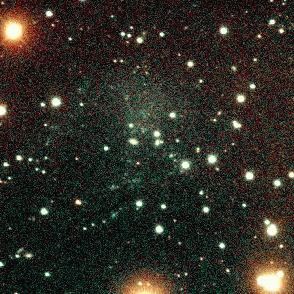 Carina (abbreviation: Car), the Keel (part of Jason's ship, the Argo), is a major southern constellation that is home to the second brightest star in the sky, Canopus. It lies to the south of Vela and the southeast of Centaurus. The Milky Way passing through Carina and Vela makes for a field rich in open clusters. See the tables below for details of the constellation's brightest stars and interesting deep sky objects.

The Carina Dwarf (Fig 2) is a dwarf galaxy that orbits our own Milky Way Galaxy; it was discovered in 1977 and lies 330,000 light-years from the galactic center. It appears to have formed several billion years after the other satellite galaxies of the Milky Way, its oldest stars dating back no more than about 7 billion years.

Carina OB1 and OB2 are two rich OB associations that lie about 10,000 light-years from the Sun, near Eta Carinae. They contain some exceptional objects, including Star 12 in Carina OB2, which, along with Eta Carinae itself, one of the most massive stars known, and the Wolf-Rayet star HD 93162 in Carina OB1, which has one of the largest known stellar X-ray luminosities.

The Southern Pleiades (IC 2602) is an open cluster of more than 50 stars in Carina, centered on the blue-white star Theta Carinae and forming a triangle in the sky with Beta and Iota Car. At a distance of less than 500 light-years, the Southern Pleiades is relatively nearby compared with many star clusters, and can be seen with the naked eye.

The Toby Jug Nebula (IC 2220) is a reflection nebula in Carina with a bipolar structure that gives it the shape of an old English drinking vessel. It surrounds and is illuminated by the red giant HD 65670, which is also an irregular variable (ranging between sixth and seventh magnitude) known by the variable star name V341 Carinae. The dust and gas in the Toby Jug Nebula have come from mass lost by this star while in its giant stage.


Brightest stars in Carina and other objects of interest