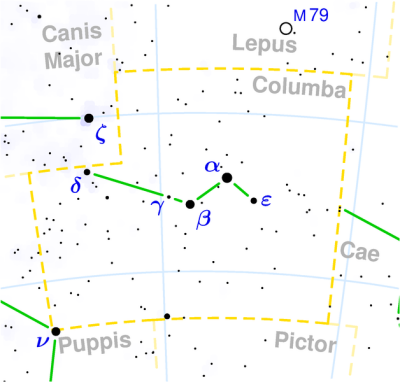 Columba (abbreviation: Col), the Dove (as released by Noah), is a small southern constellation, the main part of which is a noticeable triangle of stars set into a fairly blank area of sky.

Mu Columbae is a blue star (type O9.5, magnitude 5.16) that is one of three runaway stars diverging from a point in Orion with a speed of about 100 km/s. The other two are AE Aurigae and 53 Arietis. According to one theory, these stars once belonged to a quadruple system, of which the fourth member exploded in a supernova, about 3 million years ago, pushing the other three stars away in different directions.