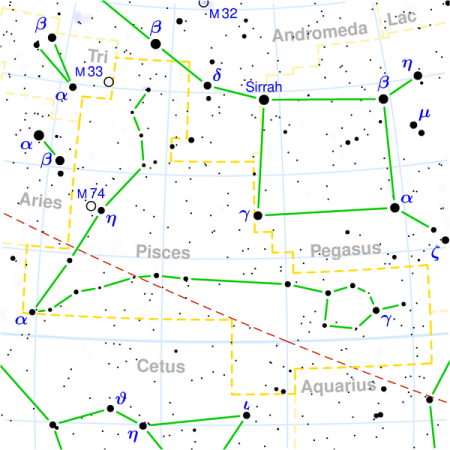 Pisces (abbreviation Psc), the Fish, is a large but faint north equatorial constellation and the twelfth of the zodiac. It lies just north of Aquarius and Cetus and is surrounded by Pegasus, Andromeda, Triangulum, and Aries. The vernal equinox lies within Pisces. Directly south of the Square of Pegasus lies another asterism known as the Circlet, or the Western Fish, formed by the stars Gamma, b, Theta, Iota, 19, Lambda, and Kappa Psc. The main deep-sky object of note is the classic type Sc galaxy M74. To see more than the bright core very good observing conditions are needed; under such circumstances a scope with an aperture of about 10 cm reveals a bit of the spiral arms. See below for details of the constellation's brightest stars.

The Pisces Dwarf (LGS-3) is a dwarf irregular galaxy and suspected member of Local Group (one of the smallest), probably a satellite of the Triangulum Galaxy (M33). It was discovered in 1979 by T. X. Thuan and G. E. Marti.

The Pisces Cloud (NGC 379, 380, 382-5) is a small group of galaxies that is part of the elongated Perseus-Pisces Supercluster. Its brightest members are the elliptical NGC 382 and the larger lenticular NGC 383, which are so close as to be interacting.

The Perseus-Pisces supercluster is one of the largest known structures in the universe. Even at a distance of 250 million light-years, this chain of galaxy clusters extends more than 40° across the northern winter sky.