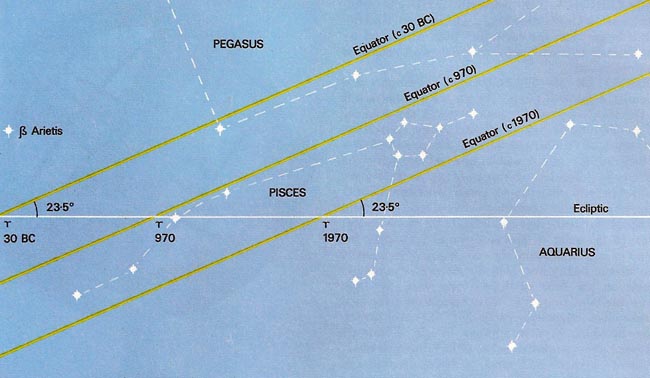 The region of the sky near the First Point in Aries, or vernal equinox, the point of intersection of the celestial equator and the ecliptic. Because of precession of Earth's poles, the First Point in Aries moves backward along the ecliptic at a rate of about 0.014° annually. As can be see, the point lies no longer in Aries (one star of which, β Arietis, can be seen) but is moving through Pisces toward Aquarius. 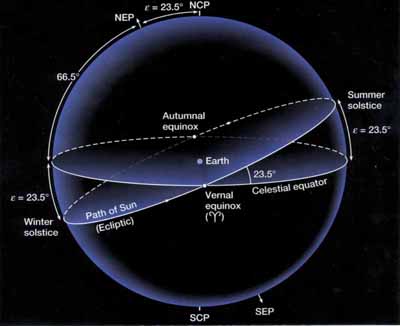 The location of the vernal and autumnal equinoxes on the celestial sphere.

An equinox is also either of the times at which the center of the Sun's disk passes through these points.

The vernal equinox (or spring equinox), when the Sun reaches its ascending node (i.e., crosses the celestial equator moving northward), falls on or around March 21 and marks the start of spring; the autumnal equinox, when the Sun reaches its descending node, occurs on or around September 22 and marks the start of autumn. These are the two days of the year on which, everywhere on Earth, day and night are of equal duration: hence the name.


Movement of the equinoxes

The equinoxes drift very slightly across the sky because of precession. For example, in the time of Hipparchus, about 2,100 years ago, the vernal equinox lay in Aries and it is still referred to as the First Point in Aries, even though it has now moved into Pisces. Likewise, the autumnal equinox, also called the First Point in Pisces, now lies in Virgo.