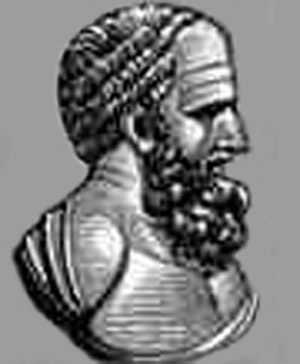 Hipparchus was a Greek astronomer and mathematician, born at Nicaea in Bithynia, who is considered the true founder of his science and the first systematic astronomer on record. He compiled an extensive star catalogue in which he gave the positions of some 1,050 stars and also classified them according to their magnitude (on a scale of 1 to 6, brightest to faintest). Ptolemy later incorporated this information into his Almagest.

Hipparchus, who made most of his observations from Rhodes, also found the distance to the Moon using the parallax method (for which he had to produce a table of chords – an early example of trigonometric tables), and, independently of Kiddinu of Babylon, discovered the precession of the equinoxes by comparing his observations with those of Timocharis 150 years earlier. He extended Apollonius of Perga's work on epicycles and eccentrics by offsetting Earth from the center of the planets' orbits in order to explain the different lengths of the seasons. He discovered the eccentricity of the Sun's path, determined the length of the solar year, and gave distances of the Sun and Moon respectively from the Earth. He also invented the planisphere and fixed the geographical position of places on the Earth by giving their longitude and latitude.

The only authority we have regarding his researches is the Syntaxis of Ptolemy. All that survives of his actual works is a commentary to the poetical description of the stars by Aratus, published in Patavius's Uranologia (1630).