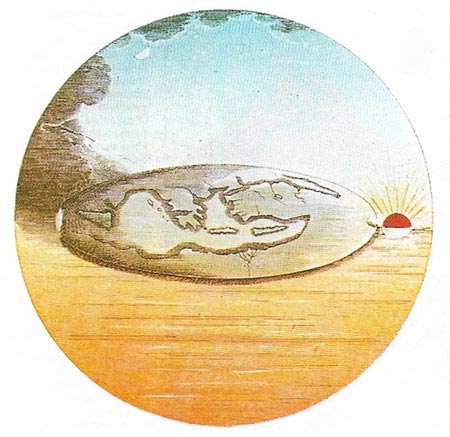 Fig 1. A Victorian illustration of the Homeric universe shows a disk-shaped Earth with Greece at its center, floating on water and surrounded by the sphere of the universe. The Sun is rising in the east and the Moon is shown high in the sky. Most Greek philosophers thought that the Sun, Moon, and planets all orbited the Earth: their innovatory idea was that the heavens were an all-embracing sphere, a more perfect shape than a dome or hemisphere. There was no evidence to support this view of the universe; it was adopted purely for aesthetic reasons. But the belief that the Earth was at the center of the universe remained until Copernicus' work in the 16th century. 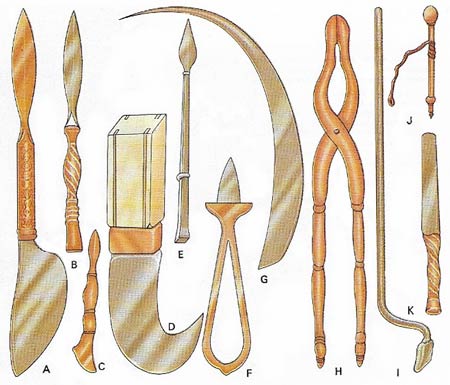 Fig 2. Greek medicine had a long and notable history; psychological medicine was practised in healing temples, as were herbal treatment and surgery. A miscellaneous collection of Greek surgical instruments shows, among other tools, forceps and scalpels of various designs. (A) Surgical knife with decorated handle and spatula. (B) Small knife with spiral band of silver inlay. (C) Bellied surgical knife made of bronze. (D) Bistoury knife with ivory handle and steel blade mounted in bronze. (E) Phlebotome used as a blood-letting knife. (F) Lancet knife with steel point and guard. (G) Fistula knife with curved blade cutting on one side and blunt end. (H) Uvula forceps. (I) Cautery used to burn away infection or stop bleeding. (J) Drill driven by thong attached to the shaft and used to remove a weapon lodged deeply in the bone. (K) Steel chisel used to divide distorted bone.

The earliest stirrings of Greek science are found in the 8th century BC in the Homeric poems with the descriptions of the stars and an unusual concept of the universe as a sphere (Fig 1). Other civilizations have been content with hemispherical skies but it was the Greek love of symmetrical shapes that led them to the concept of a spherical universe.


Greek studies of the universe

The first Greek scientific men whose names are known – Thales, Anaximander, and Anaximenes – came from the eastern seaboard of the Aegean and lived during the 6th century BC. Thales accepted the spherical universe and believed that water was the basic substance from which everything was formed. Anaximander, who thought some indefinable substance (not water) was the basic material, taught that the Earth was cylindrical in shape and, like Anaximenes, he believed the heavenly bodies were holes in a dark sky through which shone a surrounding fiery zone. The most important sixth-century scientist was Pythagoras, best known for the proof of the relationship between the sides of any right-angled triangle. He also investigated musical harmony, which led him to suggest that there was a divine relationship between numbers, music and the universe.

Significant developments in the 4th century BC followed the establishment by Plato (c. 427–347 BC) of an academy in Athens, where he laid great stress on the mathematical nature of the universe. His pupil, Aristotle (384–322 BC), the greatest scientific philosopher of antiquity, set up his own academy – the Lyceum – also in Athens. He adopted the theory, first formulated by Empedocles in the 5th century BC, of the Four Elements – earth, air, fire and water – as the fundamental components of all matter. Astronomically, Aristotle discussed whether or not theEearth moved in space but, on the basis of the available evidence, he tended to favour a fixed earth in the center of the universe. Aristotle also discussed the nature of change and especially of motion, as well as teaching that there was a fundamental difference between celestial and terrestrial bodies. The former were external and changeless, and all change, he believed, must occur below the sphere of the moon, the nearest body to the earth. He also rejected the idea, proposed in the 5th century BC by Democritus and Leucippus, that the universe is composed of separate and indestructible atoms.

The Alexandrian School was the foremost center of learning in the ancient world during the Hellenistic Age. Founded in 300 BC, and also known as the Museum (a place dedicated to the Muses), it housed the Alexandrian Library. The School was renowned from the outset, its teachers including the mathematicians Apollonius of Perga, Euclid, and Hero (or Heron); the physicians Erasistratus, Eudemus, and Herophilus; the geographer Eratosthenes; and the astronomer Hipparchus. The last great Alexandrian scientist was Claudius Ptolemy, who worked in the city between 127 AD and 151 AD. With the decline of Hellenistic culture, activity in the School turned away from original research to compilation and criticism, the study of mystical philosophy and theology assuming an increasingly significant role.


Investigation in the pure sciences

Although it was Aristotle's views about the physical universe that exerted the most profound influence on science for the following 2,000 years, he was at his best in the biological field. He carefully described the compound stomach of ruminants such as the cow and the habits of bees and the diseases they suffered; he studied the placental dogfish that reproduces its young live rather as a mammal does and made a general study of sexual reproduction. He also studied plants, although it was his friend and disciple Theophrastus (c. 372–c. 286 BC), who was the founder of botanical science. Aristotle emphasized the important notion that there is a continuous order of being stretching from inanimate matter up to man.

Following the claim by Eudoxus (c. 408–c. 355 BC) that heavenly bodies moved in circular orbits round the earth, the 3rd-century astronomer Aristarchus (310–230 BC) suggested that the sun, not the Earth, was the center of the universe and discussed the sizes of the Sun and Moon. But his theory of the universe proved unacceptable. A century later, Hipparchus (19–120 BC), the greatest observational astronomer of antiquity, discovered the precession of the equinoxes, compiled a catalogue of stars, calculated solar eclipses and had an advanced theory of the Sun's motion. The 3rd century BC is notable also for the mathematical physics of Archimedes (c. 287–212 BC) and the establishment of the library and museum of Alexandria. There, for the next 500 years, research of an advanced kind was carried out; mathematics flourished with Euclid (fl. c. 300 BC) and Apollonius (fl. 250–220 BC), who was noted for his work on astronomy and conic sections. Eratosthenes (c. 276–194 BC) estimated the earth's circumference to within 400 km (250 mi). In the 2nd century AD the astronomer Ptolemy (c. 90–168) produced his remarkable Almagest, a digest of Greek astronomy, and his Geography, using longitude and latitude as well as his own stereographic map projections. The medical lore of Hippocrates of Cos in the 5th century BC was developed by Herophilus and Erasistratus in Alexandria two centuries later. They dissected the human body, distinguishing veins from arteries, sinews from nerves, and generally laying the foundation of anatomy.


Applied sciences and the study of machines

The compound pulley was known in Aristotle's time and the screw for raising water was invented in Syracuse by Archimedes. Much Greek technology, however was also developed at Alexandria where, in about 200 BC, Ctesibius designed water clocks and a force-pump, and in the 1st century AD hero not only developed the study of machines and pneumatic devices (although e failed to find practical uses for his inventions) but also improved surveying techniques. The discovery of a mechanically geared "computer" for astronomical calculations suggests that Alexandrian technology had a wide influence.