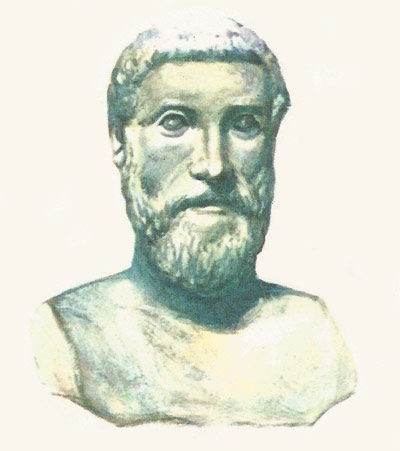 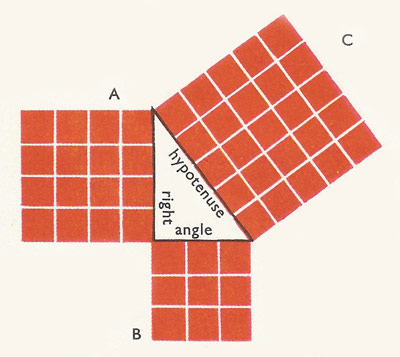 Fig 2. A diagram of the famous theorem of Pythagoras. The number of squares in A plus B equals the number in C.

Pythagoras was a Greek philosopher, mathematician, and astronomer who founded a secretive philosophical and religious school – the Pythagorean school – in Croton, southern Italy. Pythagoras left no writings and virtually nothing is known about him as an individual, so it is almost impossible to disentangle the beliefs and discoveries of the "Pythagoreans" from those of their leader.

To the Pythagoreans "everything is number" and every number was supposed to be a quantity that could be expressed as the ratio of two integers. Such a number we now call a rational number. The Pythagoreans used music as an example of the perfection and harmony of numbers that can be expressed as ratios. They showed that pitch could be represented as a simple ratios that came from the length of equally tight strings that could be plucked.

Perhaps the most famous of the Pythagoreans' mathematical results is Pythagoras's theorem. Then the sky fell in on the Pythagoreans' world-view. Using their very own theorems they showed that not all numbers are rational. Their discovery that the square root of 2 (the length of the hypotenuse of a triangle with sides one and one) can't be expressed as ratio of two whole numbers was to have been kept a closely guarded a secret, but was later revealed by one of the cult's members.

Pythagoras was born on the island of Samos, in the Aegean Sea, near Greece. Unfortunately, he left no writings behind him for in those days parchment had not yet been invented, and wax tablets were too small and awkward for anything but letters or other brief writings. Most of what we know about him, therefore, comes from later writers and, as with all great figures, fact is often mixed with legend in the story of his life and thought.

In the 6th century BC the Greeks were a prosperous and highly civilized people, and the island of Samos was one of their important trading centers, with a growing culture. The young Pythagoras, son of a well-to-do citizen, would thus have the best education possible. Even at an early age he showed great intelligence, and it seems that by the age of sixteen his teachers could no longer answer his questions, and he was sent to study under Thales of Miletus, the first Greek to make a scientific study of numbers and one of the Seven Wise Men of Greece. At this time Pythagoras may have formulated his best-known theorem, which he then set out to demonstrate. He was, in fact, one of the founders of the system of geometrical proof. Before then mathematicians did not think it important whether their conclusions corresponded with reality or not.

Pythagoras was interested not only in geometry and numbers but in the other sciences then known, above all in religion. As there were then no books, the only way to study further was to travel and meet other scholars. During the next 30 years we hear of him in Persia, Babylon, Arabia, and as far away as India, where Buddha was founding his new religion. Callimachus, the librarian at Alexandria in the third century BC, records that Pythagoras spent many years in Egypt. Here he may have learned more about music and worked out the connection between arithmetic and music, one of his most important discoveries; for example, the octave (doh-doh) and the fifth (doh-soh) can be produced by stopping the string of an instrument at half and two-thirds of its length. The terms 'harmonic mean' and 'harmonic progression' came from this discovery. By the time he reached his fifties, Pythagoras had learned much. Now he wanted to establish a school where he could teach others.

Pythagoras established his school in about 529 BC at Crotona, a prosperous Greek port in southern Italy, and soon had a following of 300 young men. It was more like a religious sect than a school, members recognizing each other by a secret sign. They owned all things in common and swore to help one another.

The subjects of study were the four degrees of wisdom (arithmetic, geometry, music, and astronomy), the duties of a man toward others, and religion. Pupils were expected to practice the virtues of valor, piety, obedience, and loyalty – in fact, all the virtues found in the Greek ideal of the good and brave man.

One of Pythagoras' main beliefs, referred to by Shakespeare in Twelfth Night and the The Merchant of Venice, was the transmigration of souls; that is, the belief that when someone dies their soul passes into another body, human or animal. According to Pythagoras, only a after a pure life could the soul be freed from the prison or 'tomb' of the flesh and win life in the heavens.

A pure life meant an austere life, but many of the rules laid down by Pythagoras were like primitive taboos. For instance, pupils could not eat beans, break bread, stir the fire with iron, or pick up what had fallen!

Music was thought most important in purifying the soul. Thus the pupils studied musical theory, and astrology. The whole heaven, he taught, was formed of a 'musical scale or number'. Pythagoras was, in fact, one of the first people to hold that the Earth and the universe are round.

Scientific study, religion, and a moral code were thus combined, and the teaching of Pythagoras himself was a strange mixture of mysticism and reason. His disciples came to look on him as semi-divine; even the mathematical and astronomical discoveries made after his death were believed to be really his.

Unfortunately, the Pythagoreans became involved in politics. Wherever they gained power they showed contempt for the ignorant and unphilosophic masses, who could not lead the highest life – that of contemplation. This led to their downfall. The people rose against them, and Pythagoras went into exile, where he eventually died at the age of eighty.

His thought, however, continued to have a real influence; Plato in particular was inspired by it.

Two hundred years after his death the Senate erected a statue to Pythagoras in Rome, honoring him s the "wisest and bravest of Greeks".

Pythagoras's lute is the kite-shaped figure that forms the enclosing shape for a progression of diminishing pentagons and pentagrams, linking the vertices together. The resulting diagram is replete with lines in the golden ratio.

The Pythagorean square puzzle is to combine the two squares shown in the accompanying diagram so as to make a single large square (see Figure 3).