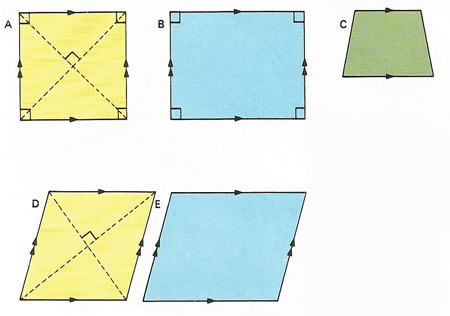 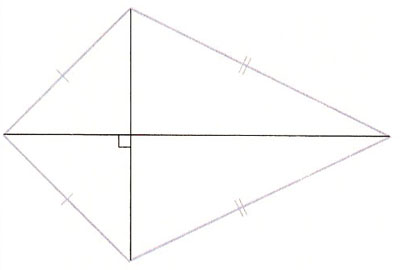 Fig 2. A kite, the diagonals of which intersect at right angles. 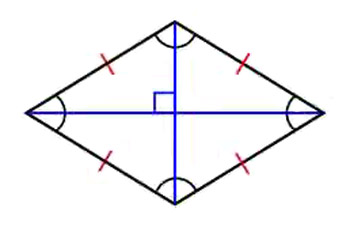 A quadrilateral is a polygon that has four sides and four vertices (corners). Quadrilaterals, and polygons in general, may be convex or concave.

A kite (Fig 2) is a quadrilateral, with two pairs of congruent adjacent sides, that is named after one of the traditional forms of toy kite. The toy itself probably draws its name from the bird commonly called a kite, or kyte, in England. The old English form of the word, cyte, may in turn derive from an early German name for an owl.

A non-convex kite is often called a dart, a term used by Roger Penrose in his proof on a non-periodic tiling of the plane (see also Penrose tiling). Proclus referred to this shape as a "four-sided triangle" and spoke of it as a geometric paradox. John Conway has pointed out that there is no special name for a quadrilateral that has two pairs of equal sides that, unlike in the case of a kite, are not parallel sides. He proposed the name strombus for such a figure, from the Greek for a spinning top.

A rectangle is a quadrilateral whose interior angles are all 90°. If all of its sides are the same length, it is a square. A rectangle is a special case of a parallelogram.

An oblong is alternate name for any rectangle that is not a square. The word comes from the Latin ob ("excessive") and longus ("long"). See also oblong number.

A rhombus (Fig 3) is a quadrilateral in which both pairs of opposite sides are parallel and all sides are the same length, that is, an equilateral parallelogram. A rhombus is also sometimes called a rhomb or a diamond. A rhombus whose acute angles are 45° is called a lozenge.

The diagonals p and q of a rhombus are perpendicular and satisfy the relationship p2 + q2 = 4a2. The area of a rhombus is given by A = ½ pq.

A square is a quadrilateral with four equal sides that meet at right angles.

If the parallel sides are of length a and b, and h is the perpendicular distance between them, then the area of the trapezoid is given by A = ½ (a + b)h.

A cyclic quadrilateral is one that can be drawn inside in a circle so that all four vertices touch the circumference.

Aubel's theorem states that given a quadrilateral and a square drawn on each side of it, the two lines connecting the centers of the squares on opposite sides are perpendicular and of equal length.

Ptolemy's theorem states that the sum of the products of the two pairs of opposite sides of a convex cyclic quadrilateral is equal to the product of the lengths of the diagonals. It is named after the mathematician, astronomer, and geographer Ptolemy of Alexandria.