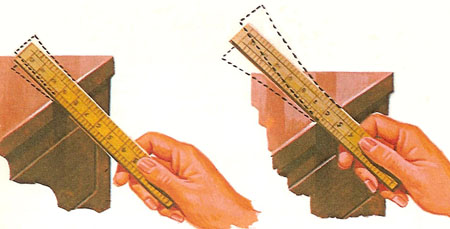 When a large part of a ruler is vibrating the wavelength of the fundamental note produced is longer and the pitch is lower than when a small part is vibrating. 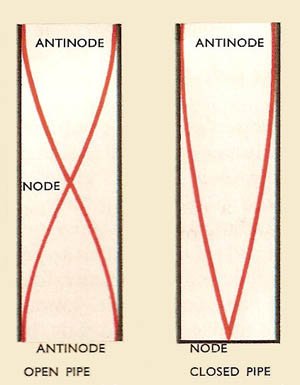 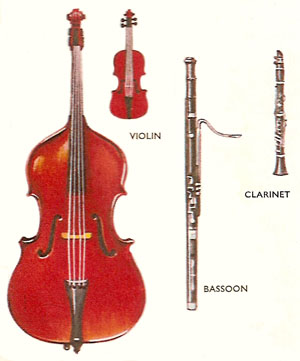 The double bass and the bassoon produce notes of lower pitch than the smaller violin and clarinet.

Musical pitch is related to the frequency of the vibrations making up a sound. The frequency associated with a given pitch name (e.g., middle C) has varied considerably over the years. The present international standard sets concert A at 440 hertz.


Development of ideas about pitch

People have long recognized the difference between high- and low-pitched notes. The great Italian scientist Galileo first put forward the idea that the pitch of a sound was determined by the frequency of its vibrations. This theory was not proved until the 17th century by Robert Hooke, who made a wheel which had small teeth sticking out from the edge at equal intervals all round it. He rotated the wheel on an axle and pressed a card onto the teeth so that a sound was given out by the teeth hitting against the card. A similar sound is given out when a ruler is dragged across some railings. If there were 100 teeth on the wheel and the wheel was rotating twice every second, then in one second the card would be hit 200 times by the teeth and the frequency of the sound would be 200 vibrations per sec. By increasing the speed at which the wheel was rotated, the frequency would automatically be increased too. Hooke noticed that this increase in speed and frequency gave rise to notes of higher pitch. By doubling the speed the note would be raised one octave. It can, incidentally, also be proved that the irregular frequencies of a wheel with unevenly spaced teeth do not give a note of a certain pitch but only an unmusical noise. Later methods of producing notes of a given pitch worked by blowing compressed air through holes that are evenly spaced round the circumference of a rotating disk. The siren works on this principle.

A musical scale is an arrangement of notes of increasing pitch and frequency. The next octave above will be of higher pitch and each note will have twice the frequency of its corresponding lower note. A good example of this is the major diatonic scale which has a middle C of frequency 256 vibrations per sec.


This is well within the range of pitch that human beings are capable of hearing. A normal ear can detect sounds whose frequencies lie between 20 and 20,000 vibrations per second. Sounds of higher pitch are inaudible and are called ultrasonic sounds (see ultrasonics. They can be heard by some animals such as dogs which have a larger range of hearing.

Different musical instruments can obtain their variations in pitch by different methods. Although a ruler is not a musical instrument, it can be used to demonstrate how pitch can be made to vary. If it is held by one end and the table edge is banged with the other, it gives out a high pitched "note". Banging lower down the ruler, nearer to the hand, gives a lower pitched note. For this lower pitched note the vibrating part of the ruler (between the table and the free end) is longer than when the high note is being produced. In general the longer the vibrating part of the instrument, the lower the pitch becomes.

Whatever the pitch of the note the sound still travels at the same speed. The speed of sound is equal to the frequency of the note times its wavelength. V = nλ where V is the speed of sound, n is the frequency, and λ is the wavelength. It stands to reason that if the speed of sound is to remain the same, high pitched notes (high frequency) will have short wavelengths and low pitched notes (low frequency) will have long wavelengths. A long string or rod fixed at both ends, or a long tube, will give a low note, whereas a short one will give a high note. One has only to look at the families of instruments in the orchestra to see that this is so. The double bass makes low pitched notes while the smaller violin makes high pitched notes. The bassoon makes lower pitched sounds than the smaller clarinet.

The xylophone is a series of plates of different sizes connected together by two cords running near the ends of the plates. When struck, the center of the plates vibrates (it is an antinode) and the ends (which are nodes do not. The effective length of the plate is half the wavelength of the fundamental sound it produces. The long plates give out the notes of long wavelength and low pitch. With the guitar, the pitch can be raised by making the effective length of the string shorter by pressing it onto a fret on the finger board. Organ pipes are of two types, some which are open at both ends (open pipes) and others which are closed at one end (closed pipes). There is always an antinode at an open end and a node at a closed end. The basic, or fundamental sound produced in an open pipe has a wavelength of twice the effective length of the pipe. That produced by a closed pipe is four times its effective length. A closed pipe will produce a note of much lower pitch than an open pipe of the same length. The organ has many pipes because each of its pipes has a fixed pitch. Instruments such as he clarinet, though, can change pitch. Uncovering a certain hole in the pipe alters its effective length and changes the wavelength and pitch.

The pitch of a note made by a wire does not entirely depend upon its length. It also depends upon how tightly it is stretched (the tension in the wire) and upon the "heaviness" or gauge of the wire. The way in which tension affects the pitch can be shown quite simply by plucking a rubber band. The more the band is stretched, the higher is the pitch. Stringed instruments are tuned by adjusting the tension in their strings. If, on a double bass, the tension in a string is too high, it is slackened by turning a knob at the top.

On stringed instruments, some strings are thin and light and others are thick and heavy. The light strings give notes of high pitch and the thick, heavy ones, deep notes of lower pitch. The effective (vibrating) length of each string must also be taken into account.

A tuning fork is a simple two-pronged instrument that emits a pure tone of fixed pitch when struck. Made with a frequency range of 20 to 20,000 hertz (Hz), tuning forks are used as acoustical frequency standards.