Sound waves. 1. The amplitude of the vibrations (waves) determines the intensity of the sound and is indicated by the distance A–B; the period is the distance C–D. This is the time the sound lasts. 2. The number of waves that follow each other in one second is called the frequency and this determines the note or pitch produced. 3. Two sounds of different intensity (the intensity of a sound increases with the amplitude of the waves which produces it). 4. Two sounds of different pitch (the pitch of a sound increases, or becomes higher, as the frequency of the waves producing it increases). 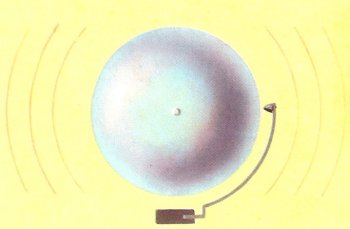 Sound waves are produced by the vibration of a body and are transmitted through a medium, such as air.

A sound wave is an example of a longitudinal wave – one in which the vibrations of the medium are in the same direction as that in which the wave travels. 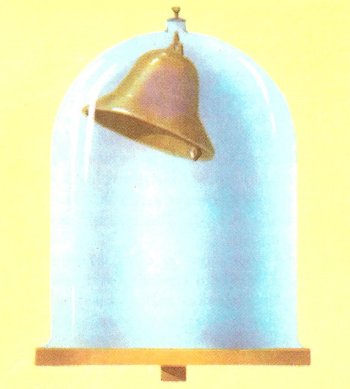 If the source if a sound is placed in a vacuum and made to vibrate we hear nothing because, in the vacuum, there is no medium to convey the vibrations to our ears. 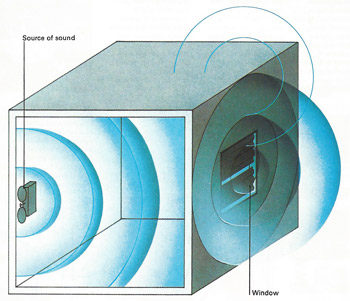 Both reflection and diffraction enable a sound to be heard even though the person or object producing the sound is hidden from view. Sound is reflected from surfaces such as walls, floors, and ceilings and, moreover, undergoes diffraction at an opening such as a door or window. As they pass the edges of the opening the sound waves spread out and hence the opening appears to be the source of the sound. 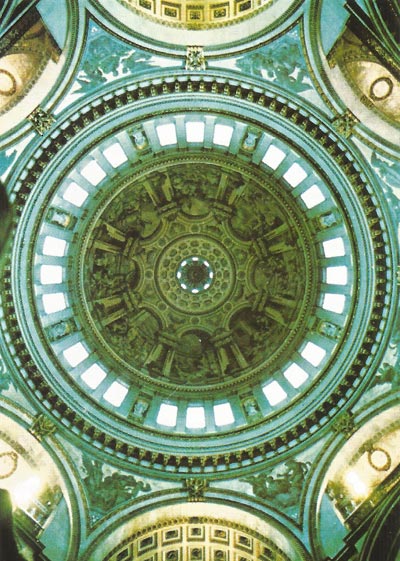 The Whispering Gallery in the dome of St Paul's Cathedral in London is renowned for its acoustics. A sound whispered on one side of the gallery can be heard clearly on the other side. Being circular in shape and made of stone, the walls reflect the sound of the whisper all round the gallery and concentrate the sound at the opposite side, 32.6 m (107 ft) away. Normally, a whisper would be inaudible at such a distance.

Sound is a vibration in an elastic medium – solid, liquid, or gas – which can be registered by the ear. Everything you hear is sound. It can be pleasant or unpleasant, loud or soft, high or low. Sound is made by vibrations, something moving back and forth. Stretch a rubber band tightly between your fingers, and pluck it. You can see it quiver and hear the sound it makes.

Inside the larynx of your throat are vocal folds (vocal cords). Like the rubber band, they vibrate. But they are moved by the air that comes past them from your lungs. You can feel this movement if you put your fingers on your throat while you talk.

You can hear a clap of thunder many miles away, or a whisper in your ear. Sound may start from far or near, but it must travel. It can travel through solids like metal, liquids like water, or gases like air, and in any direction.

Sound moves from the vibrating object in every direction like the waves you see when you drop a pebble into water. The waves of sound, like the ripples in the water, move outward in ever-increasing circles. When the rubber band moves forward and back, vibrating, the air molecules around it do exactly the same thing. They are pushed forward by each forward movement of the vibrating object, and then return to their original position to start all over again. As they go forward, they move enough to bump into the next air particle, which moves forward and bumps another and so on, until the vibration reaches your ear.

Your eardrum is like the drum in an orchestra. When the moving air molecules strike it, there is no air for them to move, so they move the eardrum instead. It vibrates, and the vibrations are changed to nerve impulses which go to the brain. The brain interprets them as sounds.

When a drummer strikes his drum strongly, a louder sound is heard then when he just taps it. The harder stroke causes larger vibrations which make your eardrum vibrate more. Your distance from the sound source makes a difference, too. As the sound waves travel, they become weaker and the sound becomes softer.

Not all notes can be heard by humans. Some are to high. Dogs can hear whistles too high to be heard by the human ear. Whales and dolphins can hear sounds that are much higher and lower than those our ears will register.

When two musical instruments, say a clarinet and a violin, play exactly the same tune, one as loud as the other, you can easily tell them apart because of the differing quality of their tones. This is called timbre. The instruments sound different because they produce many vibrations and each instrument sends out a different combination of vibrations.

As sound travels, it hits things in its path and bounces back just as a ball might bounce. An echo is made by the return of the sound waves to your ear. When you shout in a large yard with a high fence, you hear your own voice bounced back at you from the fence. In ordinary rooms sound bounces off the walls, but the trip is so short and fast that the echo occurs while you are still speaking.

You can only hear an echo if you are at least 17 m (55 ft) away from the surface that reflects the sound. Then, if you shout, the sound will travel 17 m to the wall and 17 m back, a total of 34 meters. Since sound travels at 335 m/s (1,100 ft/s), it will make the trip in one tenth of a second. You will hear the echo immediately after your shout. If you are farther away, more time will pass. Sound bouncing off a distant mountain might take enough time to come back so that you can hear several words.

Auditoriums sometimes have a bowl-shaped wall behind the stage. When sound from the stage strikes the curved surface, its reflections will be focused on the audience instead of fanning out. Megaphones make sound louder because they concentrate the sound waves toward one direction.

Sound can be muffled, too. Special materials which absorb the energy of the sound waves are used to soundproof schools and hospitals. Any porous materials such as rugs, plastics, and fibers deaden sound.

If you talk from one room to another, and some of the sound waves go around a corner, the sound waves have been bent. Sound waves that pass through changes in temperature also change their direction. Two people standing on opposite sides of a bonfire cannot hear each other because the sound waves bend when they go through the heat of the fire.

Loudspeakers are devices that turn electrical signals into sound. There are various types including woofer, mid-range, subwoofer, and tweeter, for handling sound reproduction in different frequency ranges. Factors affecting the performance of the speaker and the quality of reproduced sound include frequency response, distortion, and sensitivity.