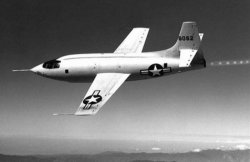 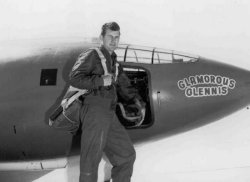 Before 1947, it was believed that the speed of sound represented a physical barrier for aircraft and pilots. As airplanes approach the speed of sound, a shock wave forms and the aircraft encounters sharply increased drag, violent shaking, loss of lift, and loss of control. In attempting to break the barrier, several planes went out of control and crashed, injuring many pilots and killing some. The barrier was eventually shown to be mythical, however, when Chuck Yeager surpassed the speed of sound in the X-1 (Fig 1 and 2).


History of the sound barrier

The term "sound barrier" originates from a comment made in 1935 by the British aerodynamicist William F. Hilton while speaking to a reporter about his high-speed experimental work at the National Physical Laboratory in England. Pointing to a plot of airfoil drag, Hilton said: "the resistance of a wing shoots up like a barrier against high speed as we approach the speed of sound." His commented was misinterpreted by the press at the time to mean that there a real physical barrier that would prevent any aircraft from traveling at the speed of sound or going beyond it. Also, some theoretical work had been carried out which suggested that the pressure exerted on a body as it neared Mach 1 would rise without limit, so that the drag would make it impossible to break through the barrier. This theory, however, turned out to rest of faulty assumptions that were not valid at transonic speeds.

In fact, scientists had been aware for a very long time that it was possible to break the speed of sound artificially. Cannonballs and bullets had been doing it for centuries. The key to reaching Mach 1 in aircraft was to minimize the rise in wave drag at transonic speeds, building engines of sufficient power, and understanding the effect of shock waves on wings and control surfaces so that control problems could be avoided.