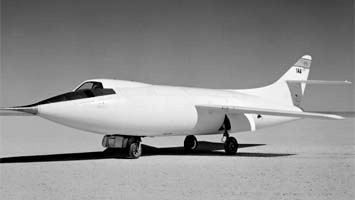 The Douglas Skyrocket was an experimental American rocket-powered plane that became the first aircraft to travel at more than twice the speed of sound. On November 30, 1953, pilot A. Scott Crossfield nudged the Skyrocket, which had been air-launched from a Boeing B-29, into a shallow dive at 18,900 m and reached 2,136 km/h (Mach 2.01).

The D-558 series, which also included the Skystreak, was developed by Douglas Aircraft under the direction of Edward H. Heinmann of the United States Navy. NACA (National Advisory Committee for Aeronautics) used the Skyrocket to explore the flight characteristics of swept-wing aircraft. The Skyrocket set a number of speed and altitude records before the program was ended in 1956.