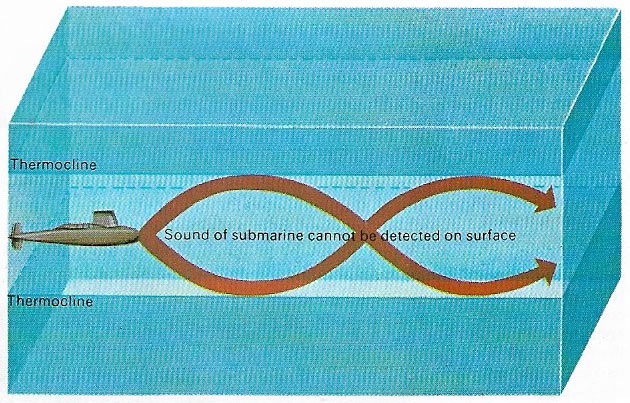 The velocity of sound in seawater is more than 4.5 times as great as it is in air but it can vary with pressure, salinity, and temperature. Sound waves passing through water in which these vary are refracted, or bent like light passing through a lens. Such refraction can take place at a thermocline – the boundary between warm surface water and cold water at depth.Submarines can make use of this effect to hide the sound of their passage from an enemy.

The speed at which small disturbances travel through a medium. In the case of a gas, such as air, the speed of sound is independent of pressure but varies with the square root of temperature. Since temperature decreases with increasing altitude in the atmosphere, so too does the speed of sound; in air at 0°C, it is about 1,220 km/h (760 mph), though it also varies slightly with humidity. The speed of sound is important because it is a measure of the shortest time in which a pressure change con be transmitted from place to place.

The various regimes of flight are subsonic (well below the speed of sound), transonic (near sound speed), supersonic (up to 5 times sonic speed), and hypersonic (above 5 times sonic speed). Compressibility effects start to become important in the transonic regime and very significant at supersonic speeds, when shock waves are present. In the hypersonic regime, the high energies involved have significant effects on the air itself. The important parameter in each of these situations is the Mach number – the ratio of the speed of the object to the local speed of sound.


Measuring the speed of sound in air

Early methods of finding the speed of sound in air used cannon. An observer stood on a hill and timed the interval between the flash and hearing the report. Knowing the distance of the cannon, the speed of sound could be calculated. This was not very accurate because the wind blew the sound away so that it had to travel in a curved path. Temperature variations in the air also caused it to refract away from a straight course.

The determination of the speed of sound in the open was important for military reasons. It enabled artillery to be located. So in 1864 Charles Regnault decided to make a more accurate determination. He set up his equipment which used an electrical method to measure the time interval, in an underground pipe near Paris. The shot of the gun broke a circuit wire stretched across the muzzle and this moved an inked pen on a recording drum at the receiving end. When the sound arrived there it moved a diaphragm which marked the drum again. Since the speed of rotation of the drum was known the speed of sound could be found.

The speed of sound is more accurately found by using two parabolic reflectors facing each other with a whistle of fixed frequency at the focus of one reflector. A microphone is placed beside the whistle and another microphone at the other focus and the leads from these two microphones are both connected to one side of a transformer. When earphones are connected up to the other side of the transformer, the output sound will grow louder and fainter as the reflectors are moved towards or away from each other. This is an example of interference in sound waves. When the sound in the earphones goes from a minimum to a maximum and back to a minimum, one reflector will have moved through exactly one wavelength. Knowing the frequency, one can calculate the speed of sound. This is an accurate, compact method and can be used for ultrasonic sound waves.


Measuring the speed of sound in water

Lake Geneva was the site of the first measurement of the speed of sound in water. A large bell under the surface was struck at the same time as a gunpowder charge was ignited above. This enabled an observer using a bent ear-trumpet covered with a membrane in the water, to time the interval between the flash and hearing the bell. A large stretch of water was needed because the speed of sound in water is nearly a mile a second.

It is important to have an accurate value of the speed of sound in water in order to design echo-sounding apparatus. More modern methods use the explosion of charge coinciding with a radio signal. The arrival of the sound is detected by hydrophones (underwater microphones) and the time interval measured.

Sound does not die away so rapidly in water as in air and travels much further. Because of this it is possible to hear the sound of ship's propellers underwater many miles away.


Variations in the speed of sound

Like light, sound can be refracted. The sound alters speed as it passes from one material to another and refraction takes place at the boundary. Because of this it can be brought to a focus by a lens, not a glass lens, but a balloon lens filled with carbon dioxide.

Sound travels faster in warmer air than colder air and this can lead to so-called zones of silence. The sound of an ammunition factory which blew up in Holland in 1923 was heard at various distances up to 800 km (500 mi), but was not heard in the interval between 96 km (60 mi) and 160 km (100 mi). This was because the sound wave which had traveled along the ground had died away, and the sound being heard at greater distances was brought about by a sound wave which had gone up into the atmosphere and been refracted down by warmer air.