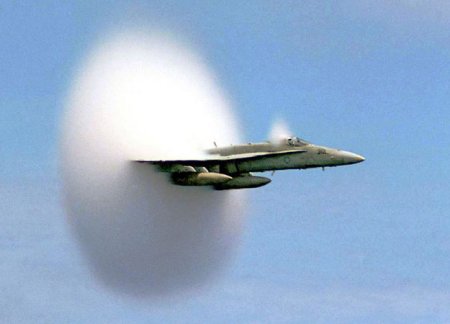 A sonic boom is the loud noise created by the shock wave set up by an aircraft or missile traveling at supersonic speeds.

A subsonic aircraft produces pressure waves ahead of itself, which travel at the speed of sound, and clear a path for the oncoming aircraft. In supersonic flight the aircraft overtakes the pressure waves so that a shock wave cone is created with the nose of the aircraft at its vertex. In level flight the intersection of the shock wave cone with the ground produces a hyperbola, at all points along which the sonic boom is simultaneously experienced; subsequently the boom will be experienced at all points within the hyperbola's path over the ground.

Large meteors and the Space Shuttle often produce audible sonic booms before they are decelerated below the speed of sound by Earth's atmosphere.

For today's supersonic aircraft in normal operating conditions, the peak overpressure varies from less than one lb to about 10 lb/sq ft for a N-wave boom. Peak overpressures for U-waves are amplified two to five times the N-wave, but this amplified overpressure impacts only a very small area when compared to the area exposed to the rest of the sonic boom.

The strongest sonic boom ever recorded was 144 lb/sq ft and it did not cause injury to the researchers who were exposed to it. The boom was produced by a F-4 flying just above the speed of sound at an altitude of 100 ft.

In recent tests, the maximum boom measured during more realistic flight conditions was 21 lb/sq ft. There is a probability that some damage – shattered glass, for example, will result from a sonic boom. Buildings in good repair should suffer no damage by pressures of less than 16 lb/sq ft. And, typically, community exposure to sonic boom is below two pounds per square foot. Ground motion resulting from sonic boom is rare and is well below structural damage thresholds accepted by the US Bureau of Mines and other agencies.

The energy range of sonic boom is concentrated in the 0.1–100 hertz frequency range that is considerably below that of subsonic aircraft, gunfire and most industrial noise. Duration of sonic boom is brief; less than a second – 100 millisec (0.100 s) for most fighter-sized aircraft and 500 millisec for the space shuttle or Concorde jetliner.

The intensity and width of a sonic boom path depends on the physical characteristics of the aircraft and how it is operated. In general, the greater an aircraft's altitude, the lower the overpressure on the ground. Greater altitude also increases the boom's lateral spread, exposing a wider area to the boom. Overpressures in the sonic boom impact area, however, will not be uniform. Boom intensity is greatest directly under the flight path, progressively weakening with greater horizontal distance away from the aircraft flight track.

Ground width of the boom exposure area is approximately one mile for each 1,000 ft of altitude; that is, an aircraft flying supersonic at 30,000 ft will create a lateral boom spread of about 30 mi. For steady supersonic flight, the boom is described as a carpet boom since it moves with the aircraft as it maintains supersonic speed and altitude.

Some maneuvers, diving, acceleration or turning, can cause focusing of the boom. Other maneuvers, such as deceleration and climbing, can reduce the strength of the shock. In some instances weather conditions can distort sonic booms.

As a plane accelerates to just break the sound barrier, an unusual, halo-shaped cloud sometimes forms if the weather conditions are just right. The origin of this cloud is still debated. A leading theory is that a drop in air pressure at the plane described by the so-called Prandtl-Glauert singularity occurs so that moist air condenses there to form water droplets. These halos of vapor appear for only a few seconds when aircraft reach speeds just below or just above the speed of sound.