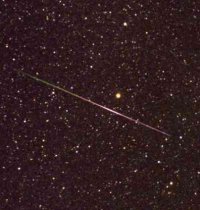 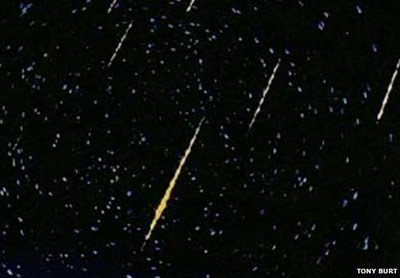 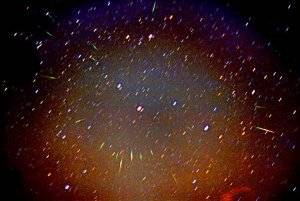 A meteor is the light phenomenon, known popularly as a shooting star or falling star, that results from the entry into Earth's atmosphere of a solid particle, or meteoroid, from space (Fig 1). Meteors occur at an altitude of about 100 km (60 miles). A typical meteor lasts for a few tenths of a second to a second or two, depending on the meteoroid's entry speed, which can vary from about 11 to 70 km/s (7 to 45 miles/sec).

A sporadic meteor is a meteor that occurs randomly, instead of being associated with a meteor shower. Sporadic meteors can be seen on any clear night, with rates varying between 3–4 meteors per hour in the northern spring to 8–10 meteors per hour in the autumn. As well as this seasonal variation, there is also a nightly variation – hourly rates being generally higher just before dawn than they are in the late evening. At certain times of the year meteor showers occur, when Earth passes through dust particles spread around the orbit of a comet.

Very large, bright meteors are known as fireballs or (if they causes a sonic boom) bolides.

A meteor train is a trail of ionized dust and gas that remains along the path of a meteor. A persistent train is one that remains visible for more than a second.

A meteor shower consists of meteors that seem to fan out from a single point in the sky, known as the radiant, in a burst of activity lasting for several hours or days Fig 2). A meteor shower consists of dusty debris, spread out along part of the orbit of a parent body, usually a comet, which Earth intersects at the time each year. In addition to the main meteor showers listed below, there are dozens of others that are more feeble or are detectable only with radar equipment during daylight hours. The Arietids, for example, reaches a maximum hourly rate of 60 on June 7 but takes place unseen against the daytime sky.

Some showers vary enormously from year to year. The Leonids are famous for this, normally putting on a modest annual show of up to 15 meteors per hour but, every 33 years or so, when the parent comet, Tempel-Tuttle, is at perihelion and in Earth's neighborhood, capable of staging a meteor storm. In years such as 1799, 1833, and 1966, when the Earth passed particularly close to the stream of debris following in the comet's wake, rates of up to 150,000 meteors per hour were reported. In other cases, the variability is more erratic and linked to changes or a complete breakup of the parent body. For example, the Draconids, also known as the Giacobinids, is usually so weak as to be unrecognizable to the untrained eye, but has been known to produce storms, as happened in 1933 and 1946 when several thousand meteors per hour were seen. The Andromedids, also known as the Bielids is best known for two sensational displays, on November 27, 1872 and 1885, following the destruction of the parent, Biela's Comet, in the mid-19th century, when the hourly rate reached 6,000 and 75,000, respectively. Since then, gravitational perturbations have gradually pulled the meteor stream out of Earth's path until today the Andromedids are very weak.

The radiant is the point where the backward projection of a meteor trajectory intersects the celestial sphere. More generally, it is the point in the sky from which meteors of a specific shower seem to come. This point moves against the background of the stars as Earth passes through the meteor stream, a movement known as radiant drift.

During a meteor shower, the zenithal hourly rate (ZHR) is the number of meteors per hour an observer would see if his limiting magnitude (the faintest object visible) is 6.5 and the radiant is in his zenith. Since these are optimum conditions, the measured hourly rate is usually less than the ZHR.

A meteor storm is a rare, short-lived event that occurs when Earth encounters a clump of particles within a meteoroid stream – a trail of material that has been released from a comet or asteroid. Meteor storms involve meteor rates exceeding 1,000 per hour (Fig 3).