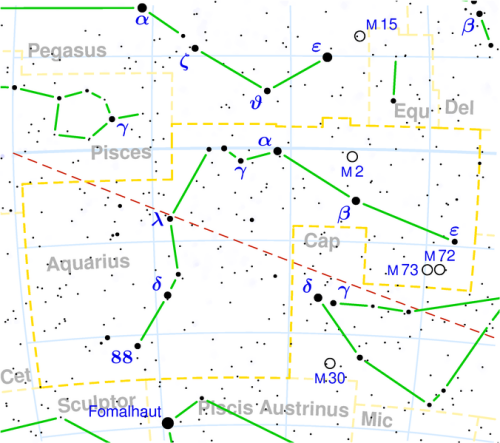 Aquarius (abbreviation: Aqr), the Water-bearer, is a large but quite faint southern constellation and the twelfth sign of the zodiac. It is surrounded by Pegasus, Equuleus, and Delphinus to the north, Aquila to the west, Capricornus so the southwest, Pisces Austrinus and Sculptor to the south, and Cetus to the east.

R Aquarii is a symbiotic star thought to consist of a white dwarf and a Mira variable in a binary system. At a distance of about 710 light-years it is one of the nearest symbiotic stars to the Sun. It has been suggested that the nebula around R Aquarii is the remains of nova-like outburst, which may have been observed by Japanese astronomers in 930 AD.

The Aquarids are either of two distinct meteor showers with a radiant in Aquarius. The Eta Aquarids are observed between about April 28 and May 21, peaking around May 5 or 6. This is a fine southern shower, associated with Halley's Comet. Typical meteor velocity is 67 km/s (42 miles/ses). The radiant is at RA 22h 20m, Dec -1°.

The Aquarius Dwarf is an irregular galaxy (type ImV) and member of the Local Group. It lies about 3.2 million light-years from the Milky Way Galaxy in Aquarius (RA 20h 47m, Dec -12° 51'). It was first catalogued in 1959 by the DDO survey.

Although the Aquarius Dwarf contains significant amounts of neutral hydrogen – the raw material needed to make new stars – it displays a very low level of star formation, which results in it being one of the least luminous members of the Local Group Local Group. It has been conjectured that this is connected to its spatial isolation.