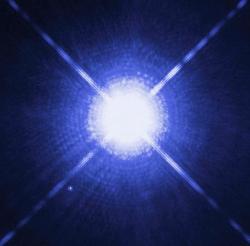 The white dwarf Sirius B appears as a dot on the lower left portion of this Hubble image. It orbits its bright companion, Sirius, every 50 yr. Image: NASA/HE Bond/E Nelan/M Barstow/M Burleigh/JB Holberg/STScI/U Leicester/U Ariz. 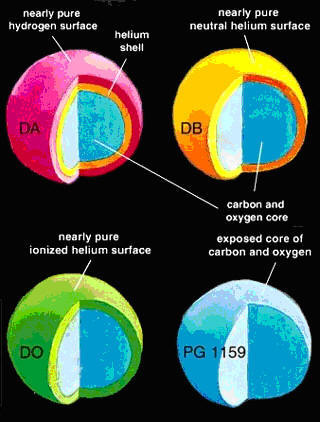 A white dwarf is a dim, dense, planet-sized star that marks the evolutionary endpoint for all but the most massive stars (see stars, evolution). The first white dwarf to be discovered, in 1862, and the closest to the Sun, is the companion of Sirius.

White dwarfs form from the collapse of stellar cores in which nuclear fusion has stopped, and are exposed to space following the loss of the old star's bloated outer envelope, typically as a planetary nebula. They consist of electron degenerate matter, which provides the pressure needed to prevent further collapse, providing that the mass of the dwarf doesn't exceed the Chandrasekhar limit of about 1.4 solar masses.

Even a fairly large white dwarf, with a mass similar to that of the Sun, is only about as big as Earth. A piece of it the size of a sugar cube would weigh about as the same as a hippopotamus.

Lighter mass stars that never get around to burning carbon in their cores give rise to carbon-oxygen white dwarfs, while stars that start out with a mass of at least 4 solar masses may give rise to neon-oxygen dwarfs. In addition, white dwarfs differ in terms of their spectra which are dictated by the elements that dominate their surfaces. Three varieties – dA, dB and dO (where "d" stands for "degenerate") – have nearly pure surfaces of hydrogen or helium lying atop their cores, whereas PG 1159 stars appear to be partially exposed cores. White dwarfs may also have a mixture of elements on their surfaces, and are named accordingly. For example, dAB stars contain hydrogen and neutral helium, whereas dAO stars have hydrogen and ionized helium.

A ZZ Ceti star is a white dwarf that is also a pulsating variable and changes in brightness by 0.001 to 0.2 magnitude over a period of 30 sec to 25 min. Non-radial pulsations are involved with multiple periodicities, which result in only slight changes in the star's size but significant fluctuations in temperature. There are three subtypes: ZZA with DA (hydrogen absorption) spectra, ZZB with DB (helium absorption spectra), and ZZO, sometimes called GW Virginis stars, with extremely hot, DO spectra. Sometimes flares of about one magnitude are observed, but these may be due to UV Ceti type companion stars.

White dwarfs that consume matter from their companions can explode as type 1a supernovae, which are used as standard candles to measure cosmic distances. In 1988, these supernovae provided the evidence for the accelerating expansion of the universe when they were found to be dimmer than expected.

Could life exist on any planets around white dwarfs? This possibility is considered in a study, published in 2012 by Luca Fossati at the Open University in the UK and his colleagues, which suggests that an Earth-like planet in a white dwarf's habitable zone would receive enough light at the right wavelengths to sustain photosynthesis.1 At the same time, the team's simulations showed, such a planet would not be sterilized by harsh ultraviolet bombardment – receiving less than double the dose of UV experienced at the Earth's surface.

Other astrobiological advantages of white dwarfs are their stability and longevity. They're not prone to the kind of unpredictable and violent activity, including superflares, often demonstrated by red dwarfs, and they should be able to sustain a habitable zone around themselves for about 8 billion yr, or almost twice the present age of Earth.

The biggest question mark hanging over white dwarfs, as regards their ability to nurture life, is whether they ever retain intact Earth- or super-Earth-sized planets in suitable orbits. No planets have yet been detected around white dwarfs, and it's unclear whether a rocky world could remain intact or in an orbit within the habitable zone given the trauma that a star goes through on its way to becoming a white dwarf, including the ejection of a planetary nebula.