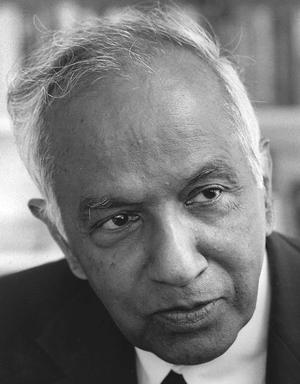 Subrahmanyan Chandrasekhar was an Indian-born American astrophysicist renowned for his theoretical work on compact celestial objects, notably white dwarfs and neutron stars. He determined the maximum possible mass of a white dwarf, now known as the Chandrasekhar limit, and that above this mass the star must collapse further to become a neutron star or a black hole.

Known for his love of mathematical beauty and precision, Chandrasekhar investigated and wrote important books on stellar structure and evolution, dynamical properties of star clusters and galaxies, radiative transfer of energy, hydrodynamic and hydromagnetic stability, the stability of ellipsoidal figures of equilibrium, and the mathematical theory of black holes.

He edited the Astrophysical Journal for nearly 20 years and shared, with William Fowler, the 1983 Nobel Prize in Physics – the same year that he published The Mathematical Theory of Black Holes. His last book was Newton's Principia for the Common Reader. Chandrasekhar received a BA at Madras University and a PhD at Cambridge, and spent the rest of his career at the University of Chicago (1937–1995). The Chandra X-ray Observatory was named in his honor.

The Chandrasekhar limit is the theoretical upper limit to the mass of a white dwarf star – a compact object made of electron degenerate matter (a dense form of matter which consists of nuclei immersed in a gas of electrons). The Chandrasekhar limit has an approximate value of 1.4 solar masses. Above this mass, the pressure exerted by electron degenerate matter is insufficient to prevent gravity from collapsing the star further to become either a neutron star or, if the Oppenheimer-Volkoff Limit is also exceeded, a black hole.