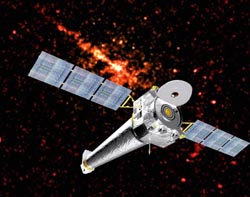 The Chandra X-ray Observatory is one of NASA's four Great Observatories. After being launched by the Space Shuttle Columbia in 1999, Chandra was boosted into a high elliptical orbit from which it can make long duration, uninterrupted measurements of X-ray sources in the universe. It uses the most sensitive X-ray telescope ever built, consisting of four pairs of nearly cylindrical mirrors with diameters of 0.68–1.4 m, to observe X-rays in the energy range 0.1–10 keV. These mirrors focus X-rays on to two of Chandra's four science instruments: the High Resolution Camera and the CCD (charge-coupled device) Imaging Spectrometer.

International participants in the mission include Britain, Germany, and the Netherlands. The Smithsonian Astrophysical Observatory (SAO) in Cambridge, Massachusetts, is responsible for day-to-day flight operations and science activities from the Operations Control Center and Chandra X-ray Center (CXC) facilities. Known before launch as the Advanced X-ray Astrophysics Facility (AXAF), the observatory was renamed in honor of the distinguished Indian-American astrophysicist Subrahmanyan Chandrasekhar.