Internal structure of a red dwarf. 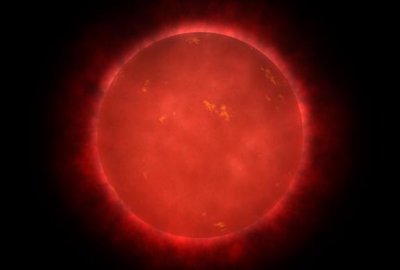 Artist's impression of a red dwarf. 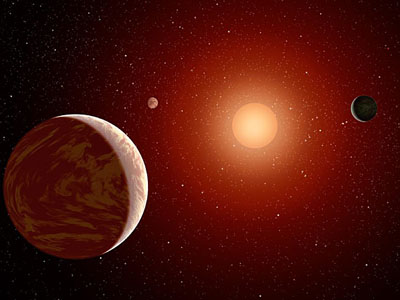 A red dwarf is a small, dim, main sequence star of spectral type M (see M star) or late K (see K star). The characteristic properties of red dwarfs stem ultimately from their low mass, which is approximately in the range 0.1 to 0.5 solar mass. Their low surface temperature, in the range 2,500 to 3,500&#176C, imparts to them a ruddy hue, while their combination of low temperature and small surface area results in them being very faint. The have fully convective interiors, i.e., convective envelopes and convective cores. Many red dwarfs are also flare stars.

Red dwarfs survive longer (see stars, lifetimes of) and are more numerous (see stars, numbers of) than any other kind of star, with the probable exception of brown dwarfs. Of the 30 nearest stars to the Sun, for example, 21 fall into this category (see stars, nearest). They include:

Like other types of star, red dwarfs may be accompanied by planets. Indeed, one of the most Earth-like exoplanets discovered to date, in terms of its mass and distance from its parent star, has been found around the remote red dwarf OGLE-2005-BLG-390L. However, there are doubts whether any worlds in orbit around such faint stars could harbor life. These doubts arise because of the extremely small habitable zone that would surround a red dwarf. Any planet so close to its parent star would almost certainly end up in a gravitational lock, with one side permanently turned toward the star. Under such circumstances, it is not clear whether life would be able to evolve.