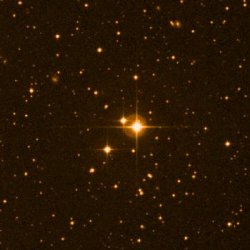 Groombridge 34 is a nearby binary star system consisting of two red dwarfs in a nearly circular orbit with a separation of about 147 AU and an orbital period of 2,600 years. Both components are flare stars and have been given variable star names: the brighter member (Groombridge 34 A) is designated GX Andromedae and the other member is designated GQ And.

Groombridge 34 lies 11.6 light-years away in the constellation Andromeda. It was first listed by Stephen Groombridge (1755–1834) in "A Catalog of Circumpolar Stars" (commonly referred to as the Groombridge Catalogue), published posthumously in 1838.