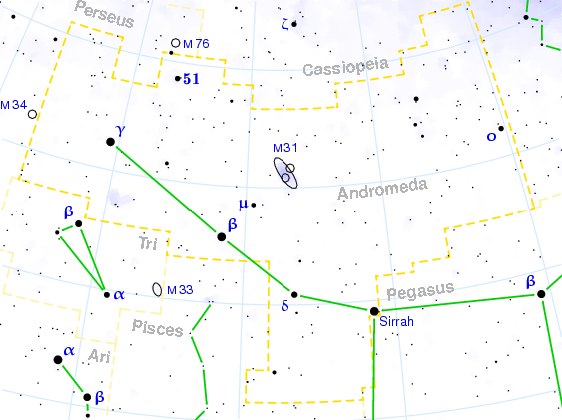 Andromeda (abbreviation And) is a large, prominent northern constellation, to the south of Cassiopeia, between Perseus and Pegasus.

In mythology, Andromeda was chained to a rock to be sacrificed to Cetus (the Whale) as a punishment to her mother, Cassiopeia, who had boasted that she was more beautiful than the daughters of Neptune.

Andromeda's three brightest stars lie along an arc that stretches to the northeast of the Square of Pegasus, of which Alpheratz (Alpha Andromedae) forms a corner. Alpheratz and Mirach, the two brightest stars, have identical magnitudes, which is a coincidence found in no other constellation. Near to third-ranked Almaak is the most outstanding feature of Andromeda – our nearest neighboring major galaxy, the Andromeda Galaxy.

S Andromedae, also known as SN 1885 (Supernova 1885), is the only supernova seen to date in the Andromeda Galaxy and the first supernova observed beyond the galaxy in which we live, Milky Way Galaxy. S Andromedae (a variable star designation) was discovered on 19 August 1885, by the Irish amateur astronomer Isaac Ward in Belfast, and independently the following day by Ernst Hartwig (1851–1923) at Dorpat Observatory in Estonia; Hartwig was the first to realize its significance.

S Andromedae reached magnitude 6 between August 17 and 20, and had faded to magnitude 16 by February 1890. In 1988, R. A. Fesen and colleagues using the 4-m Mayall telescope at Kitt Peak discovered the remnant of the explosion; further observations were made with the Hubble Space Telescope in 1995.

The Andromedids is a meteor shower associated with Comet 3D/Biela, not observed since 1940. The first recorded appearance of the shower, which radiated from near the star Gamma Andromedae, was in 1741. Spectacular meteor storms were observed in November 1872 and 1885, following the break-up of the associated comet, when the rates were many thousands per hour. The shower is also known as the Bielids.