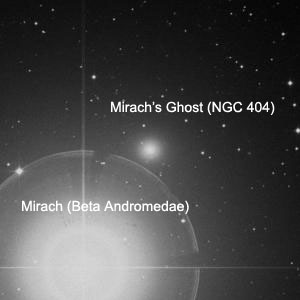 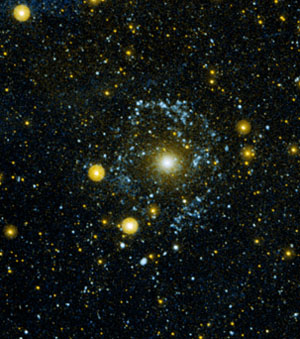 Mirach's Ghost (NGC 404) is a dwarf lenticular galaxy of type S0 in the constellation Andromeda that is seen almost face-on. Although of high surface-brightness, it is difficult to observe, because of the glare of Mirach (Beta Andromedae), just 7 arc-minutes away.

NGC 404 is typical of spheroidal galaxies in that it has few luminous, young stars but a high proportion of red giants and asymptotic giant branch (AGB) stars. Red giants dominate in the disk, while the bulge of the galaxy is populated by both red giants and AGB stars.

NGC 404 was discovered by William Herschel in 1784. It lies just beyond the edge of the Local Group and appears not to be gravitationally bound to it. Although it has been listed as a loose member of the LGG 011, it is probably physically unassociated with it and may well be the nearest isolated S0 galaxy, its nearest neighboring galaxy being at least 1.1 Mpc (3.6 million light-years) away.

For many years the distance to NGC 404 was very uncertain, estimates ranging from 1.5 megaparsecs (Baars & Wendker 1976) to 10 Mpc (Wiklind & Henkel 1990). Only recently has the distance become reasonably well known using two independent methods. In 2001 Tonry et al. used the surface brightness fluctuation method to arrive at a distance of 3.3 Mpc (10.8 million ly). This was confirmed the following year by Karachentsev et al. who used the tip of the red giant branch to obtain a distance of 3.15 ± 0.32 Mpc.

NGC 404 is one of the nearest examples to the Milky Way of what used to be known as an early-type galaxy, and shows an unusual amount of activity for such a system. It is surprisingly rich in interstellar atomic and molecular gas, has a prominent, semicircular dust lane that encircles the nucleus, and has a number of bright ultraviolet point sources. It was first classified as a LINER by Schmidt et al. in 1990. Observations (Barbon et al., 1982) using photographic surface photometry revealed the presence of a bulge, lens, and disk components, characteristic of a lenticular galaxy and ruling out the possibility, suggested by some astronomers, that it might be a dwarf elliptical.

In 2008, observations in the ultraviolet by NASA's Galaxy Evolution Explorer revealed a ring of young stars (see lower image) surrounding the well-known, very old stellar population. Previous imaging with the Very Large Array radio telescope had discovered a gaseous ring of hydrogen that matches this ultraviolet ring. The authors of the Very Large Array study attributed the gas ring to a violent collision between NGC 404 and a small neighboring galaxy 900 million yr ago. The ultraviolet observations show that, when the hydrogen from the collision settled into the plane of the lenticular galaxy, new stars began to form. The findings indicate that the evolution of lenticular galaxies might not yet be complete. They may, in fact, continue to form stars in a slow, piecemeal fashion as they suck the raw, gaseous material for stars from small, neighboring galaxies.