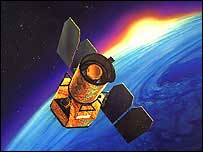 GALEX (Galaxy Evolution Explorer) is an orbiting space telescope that observes galaxies in ultraviolet light across 10 billion years of cosmic history. The data it returns is expected to lead to a better understanding of how galaxies evolve and change (see galaxy formation). Additionally, GALEX probes the causes of star formation during a period when most of the stars and elements we see today had their origins. It is equipped with a 50-cm telescope sensitive in the region 130–300 nanometers and an efficient spectroscope that can obtain the spectra of about 100,000 galaxies per year. Led by the California Institute of Technology, GALEX will conduct several first-of-a-kind sky surveys, including an extragalactic ultraviolet all-sky survey. During its 29-mo mission GALEX will produce the first comprehensive map of a Universe of galaxies under construction, bringing us closer to understanding how galaxies like our own Milky Way were formed. Other partners in the project include NASA, JPL (Jet Propulsion Laboratory), the Orbital Science Corporation, and various universities in California, France, and Japan. GALEX is the sixth SMEX (Small Explorer) mission.