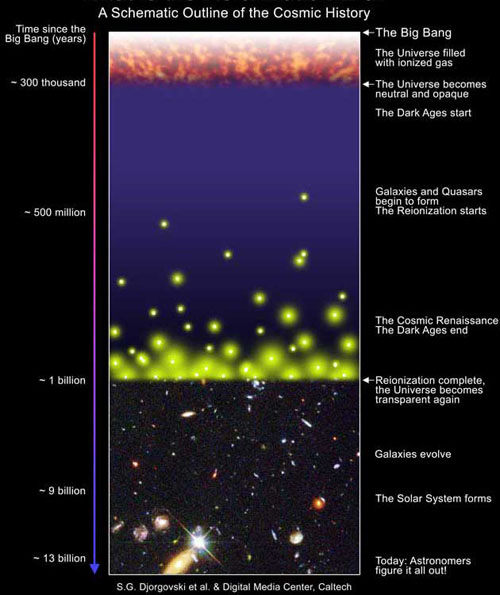 The formation of galaxies, i.e., the sequence of events by which galaxies took shape, is one of the most important unresolved problems in cosmology. Most galaxy formation is thought to have happened in the early universe following the recombination era that ended about 300,000 years after the Big Bang. Small fluctuations present in the cosmic microwave background at this time, first detected by the Cosmic Background Explorer (COBE), provide evidence of matter clumping together – an essential prerequisite for galaxies to assemble in a cosmos that is generally flying apart. Unless islands of matter had been able to come together at this stage, there would have been no chance later on when the cosmic contents had become more dilute.

The details of galaxy formation are unknown, though there's no shortage of theories. It seems certain that dark matter played a crucial role in providing a gravitational anchor for normal matter to condense into galaxies, but the details depend on whether dark matter is hot or cold, and this is undetermined. (Cold dark matter makes galaxy formation easier to understand because the hot variety would tend to smear out, by rapid particle motions, any density enhancements before they had a chance to condense further.)

The basic idea is that the first lumps of matter to break free of the universe's expansion were mostly dark matter together with some neutral hydrogen and a dash of helium. As these lumps condensed further under their own gravity, the dark matter and the ordinary matter would have separated because the latter can dissipate energy. As the atoms in the hydrogen/helium gas came closer together, during gravitational collapse, they collided more often, heated up, and got rid of this heat as infrared radiation, allowing the collapse to continue. Dark matter doesn't interact in this way and would have continued to orbit in the halo of the galaxy-to-be – exactly where it is found in galaxies today. As the hydrogen/helium gas in the protogalaxy lost energy, its density rose, and gas clouds formed. When two clouds collided, the gas was compressed into a shock front, triggering a burst of star formation. With the production of its first light by its first stars, the protogalaxy became a primeval galaxy.

According to one scenario, the new-born galaxies were small, perhaps no bigger than globular clusters, and lying along filaments that threaded the dawn universe like a spider web. Moving in random directions these infant star systems (or perhaps they were still at the pre-stellar stage) occasionally came close and merged. Repeating the process many times over caused larger and larger galaxies to form. Over billions of years, the filaments were replaced by clusters of galaxies connected by bridges – the remains of the largest of the original filaments. This spider web theory of galaxy formation gained ground in 2001 thanks to observations by the Very Large Telescope which showed, according to the team involved, a string of dense clumps of hydrogen in the early universe, glowing because of hot young stars inside them. The clumps are protogalaxies, claim the researchers, lying within a tubular region of space – a filament stuffed with galaxies in the making.


Starless galaxies spotted at the dawn of time

In 2012, astronomers, using the Very Large Telescope, announced the discovery of dark galaxies – small, gas-rich galaxies in the early universe in which little star formation has taken place. The existence of these pre-stellar systems was revealed by detecting the fluorescence from them caused by the intense radiation of a nearby quasar.