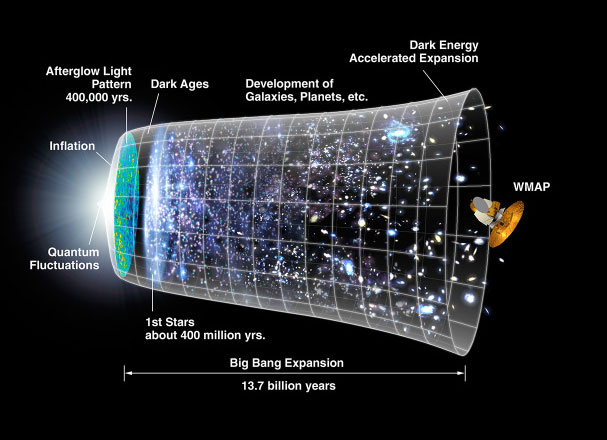 Time line of the Universe. The expansion of the universe over most of its history has been relatively gradual. The notion that a rapid period of "inflation" preceded the Big Bang expansion was first put forth 25 years ago. Recent observations, including those by NASA's WMAP orbiting ob era tory favor specific inflation scenarios over other long held ideas. Credit: NASA. 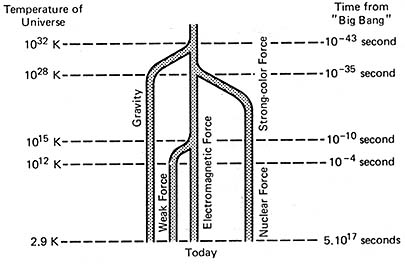 unification of forces in the early universe.

The Big Bang is the event in which, according to standard modern cosmology, the Universe came into existence some 12 to 15 billion years ago. It is sometimes described as an "explosion;" however, it is wrong to suppose that matter and energy erupted into a pre-existing space. Modern Big Bang theory holds that space and time came into being simultaneously with matter and energy. The possible overall forms that space and time could take – closed, open, or flat – are described by three different cosmological models.

According to current theory, the first physically distinct period in the Universe lasted from "time zero" (the Big Bang itself) to 10-43 sec later, when the universe was about 100 million trillion times smaller than a proton and had a temperature of 1034 K. During this so-called Planck era, quantum gravitational effects dominated and there was no distinction between (what would later be) the four fundamental forces of nature – gravity, electromagnetism, the strong force, and the weak force. Gravity was the first to split away, at the end of the Planck era, which marks the earliest point at which present science has any real understanding. Physicists have successfully developed a theory that unifies the strong, weak, and electromagnetic forces, called the Grand Unified Theory (GUT). The GUT era lasted until about 10-38 sec after the Big Bang, at which point the strong force broke away from the others, releasing, in the process, a vast amount of energy that, it is believed, caused the Universe to expand at an extraordinary rate. In the brief ensuing interval of so-called inflation, the Universe grew by a factor of 1035 (100 billion trillion trillion) in 10-32 sec, from being unimaginably smaller than a subatomic particle to about the size of a grapefruit.

Postulating this burst of exponential growth helps remove two major problems in cosmology: the horizon problem and the flatness problem. The horizon problem is to explain how the cosmic microwave background – a kind of residual glow of the Big Bang from all parts of the sky – is very nearly isotropic despite the fact that the observable universe isn't yet old enough for light, or any other kind of signal, to have traveled from one side of it to the other. The flatness problem is to explain why space, on a cosmic scale, seems to be almost exactly flat, leaving the universe effectively teetering on a knife-edge between eternal expansion and eventual collapse. Both near-isotropy and near-flatness follow directly from the inflationary scenario.

At the end of inflationary epoch, the so-called vacuum energy of space underwent a phase transition (similar to when water vapor in the atmosphere condenses as water droplets in a cloud) suddenly giving rise to a seething soup of elementary particles, including photons, gluons, and quarks. At the same time, the expansion of the universe dramatically slowed to the "normal" rate governed by the Hubble law. At about 10-10 sec, the electroweak force separated into the electromagnetic and weak forces, establishing a universe in which the physical laws and the four distinct forces of nature were as we now experience them.

The biggest chunks of matter, as the Universe ended its first trillionth of a second or so, were individual quarks and their antiparticles, antiquarks – the underlying particles out of which future atoms, asteroids, and astronomers would be made. As time went on, quarks and anti-quarks annihilated each other. However, either because of a slight asymmetry in the behavior of the particles or a slight initial excess of particles over antiparticles, the mutual destruction ended with a surplus of quarks. Only because of this (relatively minor) discrepancy do stars, planets, and human beings exist today.

Between 10-6 and 10-5 sec after the beginning of the Universe, when the ambient cosmic temperature had fallen to a balmy 1015 K, quarks began to combine to form a variety of hadrons. All of the short-lived hadrons quickly decayed leaving only the familiar protons and neutrons of which the nuclei of atoms-to-come would be made. This hadron era was followed by the lepton era, during which most of the matter in the Universe consisted of leptons and their antiparticles. The lepton era drew to a close when the majority of leptons and antileptons annihilated one another, leaving, again, a comparatively small surplus to populate the future universe.

Up to this stage, neutrons and protons had been rapidly changing into each other through the emission and absorption of neutrinos. But, by the age of one second, the Universe was cool enough for neutron-proton transformations to slow dramatically. A ratio of about seven protons for every neutron ensued. Since to make a hydrogen nucleus, only one proton is needed, whereas helium requires two protons and two neutrons, a 7:1 excess of protons over neutrons would lead to a similar excess of hydrogen over helium – which is what is observed today. At about the 100-sec mark, with the temperature at a mere billion K, neutrons and protons were able to stick together. The majority of neutrons in the Universe wound up in combinations of two protons and two neutrons as helium nuclei. A small proportion of neutrons contributed to making lithium, with three protons and three neutrons, and the leftovers ended up in deuterium – an isotope of hydrogen with one proton and one neutron.

Most of the action, at the level of particle physics, was compressed into the first couple of minutes after the Big Bang. Thereafter, the universe settled down to a much lengthier period of cooling and expansion in which change was less frenetic. Gradually, more and more matter was created from the high energy radiation that bathed the cosmos. The expansion of the Universe, in other words, caused matter to lose less energy than did the radiation, so that an increasing proportion of the cosmic energy density came to be invested in nuclei rather than in massless, or nearly massless, particles (mainly photons). From a situation in which the energy invested in radiation dominated the expansion of spacetime, the Universe evolved to the point at which matter became the determining factor. Around 10,000 yr after the Big Bang, the radiation era drew to a close and the matter era began.


When the Universe became transparent

About 300,000 years after the Big Bang, when the cosmic temperature had dropped to just 3,000 K, the first atoms formed. It was then cool enough to allow protons to capture one electron each and form neutral atoms of hydrogen. While free, the electrons had interacted strongly with light and other forms of electromagnetic radiation, making the Universe effectively opaque. But bound up inside atoms, the electrons lost this capacity, matter and energy became decoupled, and, for the first time, light could travel freely across space. This, then, marks the earliest point in time to which we can see back. The cosmic microwave background is the greatly redshifted first burst of light to reach us from the early Universe and provides an imprint of what the Universe looked like about a third of a million years after the Big Bang. Fluctuations in the nearly-uniform density of the infant Universe show up as tiny temperature differences in the microwave background from point to point in the sky. These fluctuations are believed to be the seeds from which future galaxies and clusters of galaxies arose.