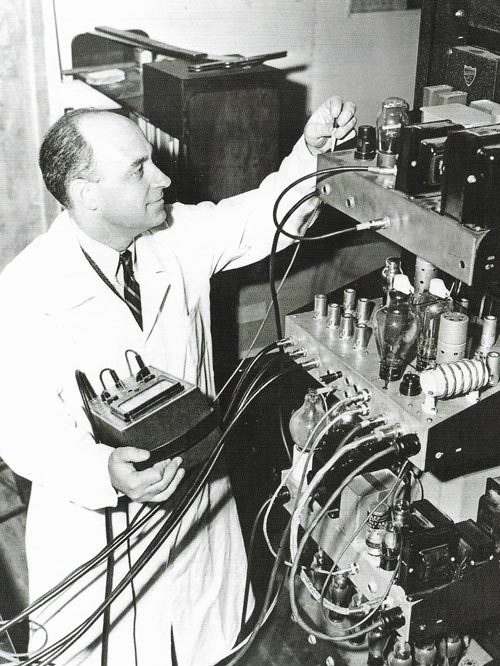 Enrico Fermi photographed in 1948 with equipment for the particle accelerator at the University of Chicago.

The weak force is one of the four fundamental forces of nature, along with gravity, electromagnetism, and the strong force. The weak force is the second weakest of these, after gravity. It affects all matter particles, but not force-carrying particles. Weak interactions are responsible for all processes in which flavor changes, and hence for the instability of heavy leptons and quarks, and particles that contain them. Weak interactions that do not change flavor have also been observed.

The existence of the weak force was first hypothesized by Enrico Fermi in 1934. It is responsible for the decay of nuclear particles and is essential for the nuclear fusion that causes the Sun's heat and light. It was also crucial the process of nuclear synthesis that produced the heavy elements of which we are all composed.

The discovery of elementary particles and their interactions has often been triggered by difficulties in explaining the behavior of already observed particles. With the discovery of the neutron in 1932, the nucleus of the atom was known to consist of protons and neutrons. Yet, it soon became clear that the actions of these particles could not be adequately described by all the forces then known. Radioactivity occurs when the nucleus decays, and the process is explained by the electromagnetic force; but that force could not account for a form of radiation called beta decay, in which a neutron is changed into a proton. As the strong nuclear force was already known, this led Fermi to propose a weak form that would involve a particle called the neutrino, which was finally detected in 1956.

The weak force was still not fully described unless other particle could be found to mediate these weak interactions. The existence of these W and Z bosons was confirmed by particle accelerator experiments in 1983. These high energy experiments have also shown weak force to be remarkably powerful over very short distances, having a strength similar to the electromagnetic force. This led to a new theory that unifies these two forces as the electroweak force.