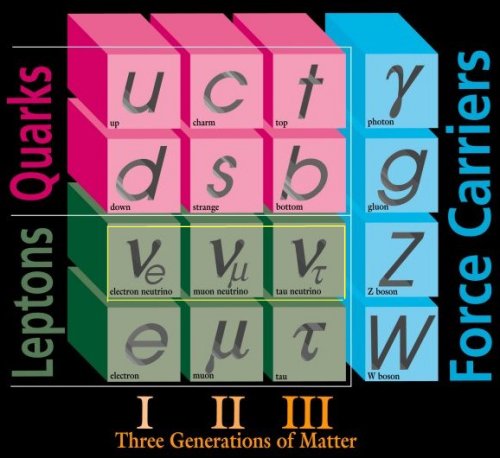 The three types of neutrinos show in relation to the other known elementary particles. Credit: Fermilab.

The neutrino is a subatomic particle with no charge and very little mass, that interacts only by the weak force and by gravity. It is a member of the lepton (lightweight) family of particles to which the electron also belongs. Neutrinos travel at or close to the speed of light and have zero electric charge. Ghostlike in their ability to avoid interacting with matter, it has been estimated that neutrinos could pass through 100 light-years of solid lead with only a 50% chance of being absorbed. The name, which means "little neutral one" in Italian, was coined by Enrico Fermi in 1933.

The existence of neutrinos was first postulated in 1930 by Wolfgang Pauli to ensure conservation of energy and angular momentum in beta decay; effectively, it carries away excess energy in nuclear reactions. Three different types of neutrinos exist, known as electron-, mu-, and tau-neutrinos, corresponding to the three massive leptons: electrons, muons, and tau leptons.

The Sun produces neutrinos from thermonuclear fusion reactions in its core and, since these neutrinos pass clean through the Sun and then all the way to Earth, they provide a way of glimpsing into the heart of a star. A large flux of neutrinos carries away most of the energy of a supernova and neutrinos are one of the candidates for dark matter. So, neutrino astronomy offers an important new window on the universe beyond the electromagnetic spectrum. Because neutrinos pass so easily through matter, they're very hard to detect: large masses of stopping material and indirect detection of the effects of neutrino absorption are needed. Among the most powerful neutrino "telescopes" are the Sudbury Neutrino Observatory in Canada and the Super-Kamiokande in Japan.

One of the great puzzles of astrophysics in recent decades, has been the discrepancy between the number of neutrinos detected coming from the Sun and the number expected from theory. The so-called solar neutrino problem, which emerged from measurements by Ray Davis and his pioneering neutrino detector in a South Dakotan gold mine, suggesting that only one-third the expected number of solar neutrinos were arriving at Earth, has now been effectively cleared up by recent data from the Canadian and Japanese instruments. These data show that some of the electron-neutrinos produced in the Sun's core change into the other types of neutrino while en route to Earth. Earlier experiments, including that of Davis, only registered the electron-neutrinos and therefore suggested a shortfall. The newer experiments, such as that at Sudbury, pick up all the varieties of neutrino and have shown that the total count of solar neutrinos is in line with the rate of electron-neutrino predicted by orthodox theory of nuclear reactions inside the Sun.