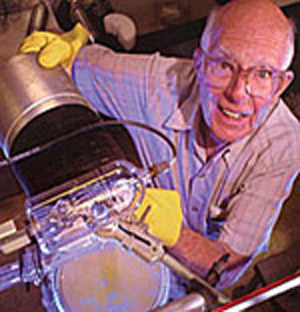 Raymond Davis was an American physicist who was the first to detect solar neutrinos, the signature of nuclear fusion reactions occurring in the Sun's core. In research from 1967 to 1985 (for which he shared the 2002 Nobel Prize in Physics), using chlorine detectors located deep underground in a South Dakota gold mine, Davis found only one-third of the neutrinos that standard theories predicted. His results threw the field of astrophysics into an uproar, and, for nearly three decades, physicists tried to resolve the so-called solar neutrino puzzle. Experiments in the 1990s using different detectors around the world eventually confirmed the solar neutrino discrepancy. Davis's lower-than-expected neutrino detection rate is now accepted as evidence that neutrinos have the ability to change into one of three known neutrino forms. This property, called neutrino oscillation, implies that the neutrino has mass. Davis's detector was sensitive to only one form of the neutrino, so he observed less than the expected number of solar neutrinos. Davis retired from Brookhaven in 1984, but remained a research collaborator in the university's chemistry department.