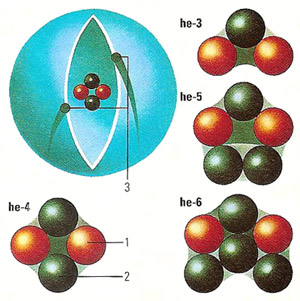 The helium nucleus consists of two protons (1) and (most usually) two neutrons (2), about which two electrons (3) revolve. The helium atom is smaller in size than the lighter hydrogen atom with its single proton and electron, because the greater charge of the helium nucleus pulls the electrons closer in. Although it is easier to conceive of electrons orbiting the nucleus in circular orbits, the shell should be considered as a "probability cloud" of locations in which the electrons are likely to be found. Isotopes of helium, although retaining 2 protons and 2 electrons, may contain 1 to 4 neutrons. 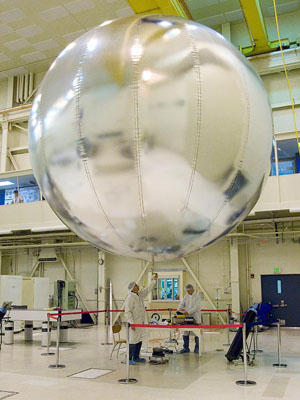 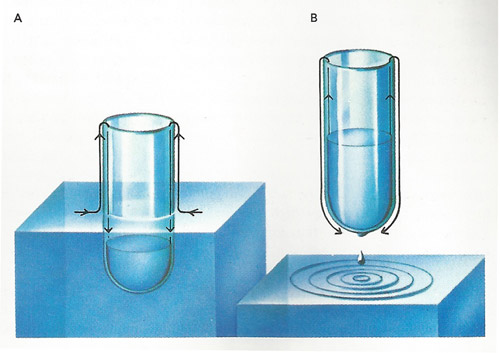 Liquid helium cooled below its boiling-point behaves strangely. If a tube is dipped into liquid helium [A] at a temperature of 2.18 K (-270.97 °C) an invisible film of liquid creeps up the outside of the tube and then down the inside. The helium fills the tube until the liquid levels are the same inside and out. If the tube is raised a little [B] the "superfluid" helium flows the other way to equalize the levels. Drops of the liquid drip off the bottom of the tube. The thickness of the liquid film can be measured (by light polarization) as about 3 millionths of a cm at a height of 1 cm above the liquid.

Helium (He) is a colorless, odorless, unreactive gaseous element which is the second most abundant and second lightest element in the universe (after hydrogen). It has the lowest melting point and boiling point of any element. Helium is one of the noble gases (also known as noble gases). An ordinary helium atom consists of a nucleus of two protons and two neutrons surrounded by two electrons. Seven isotopes of helium are known.

The main source of helium is natural gas. It is used to inflate and provide lift for balloons and airships; in breathing mixtures for deep-sea divers; as a pressurizer for the fuel tanks of liquid-fueled rockets; in helium-neon lasers; as an inert gas shield for arc welding; as a protective gas in growing silicon and germanium crystals and producing titanium and zirconium; and as a superfluid in the form of helium II.

Jules Janssen obtained the first evidence of helium during the solar eclipse of 1868 when he detected a new line in the solar spectrum. J. Norman Lockyer and Edward Frankland suggested the name helium (from the Greek helios for Sun) for the new element. In 1895 William Ramsay discovered helium in the uranium mineral cleveite; it was independently discovered in cleveite by the Swedish chemists Cleve and Langlet at about the same time. In 1907, Ernest Rutherford and Thomas Royds demonstrated that alpha particles are helium nuclei.

Liquid helium 4He exists in two forms. Helium I, stable from 2.19K to 4.22K, is a normal liquid, used as refrigerant and in cryogenics. Below 2.18K, it becomes helium II, which is a superfluid displaying superconductivity, zero viscosity, the ability to flow over the side of a vessel in which it is placed, and other strange properties predicted by quantum mechanics.

In the 1970s, David Lee, Douglas Osheroff and Robert Richardson, in the low-temperature lab at Cornell University discovered that 3He also enters a superfluid phase, at a temperature of about two thousandths of a degree above absolute zero. For this, they were awarded the 1996 Nobel Prize in Physics. Solid helium can only be produced at pressures above 25 atm.

Most of the helium in the universe was produced immediately after the Big Bang, although an additional contribution has come from hydrogen burning inside main sequence stars. It occurs commonly in stars and in the atmospheres of gas giants. See also elements, cosmic abundance. The helium content of Earth's atmosphere is about 1 part in 200,000.

A helium star is an O star or B star in which the absorption lines of helium are abnormally strong and those of hydrogen are absent or weak. Extreme helium stars (also called hydrogen-deficient stars) show no trace of hydrogen, while intermediate helium-rich stars have hydrogen lines that are visible but weaker than in normal stars. The loss or depletion of the star's hydrogen envelope, leaving essentially an exposed helium core, may have happened because of a powerful stellar wind, as in Wolf-Rayet stars, or because of mass transfer to a close binary companion. "Helium star" is also an obsolete name for a normal B star. A helium variable is a Bp star in which the strength of the helium lines varies periodically. At the extreme phases, the object appears as helium-rich, while at other phases helium lines may be very weak or absent.