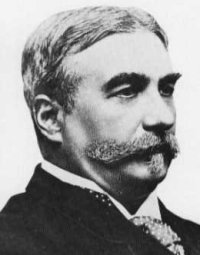 Norman Lockyer was an English solar astronomer who carried out pioneering studies of the Sun's spectrum, independently of William Huggins and Thomas Young. With a prism, he also studied solar prominences. He concluded that a line reported to him by Jules Janssen belonged to a new element, never detected up to that point on Earth, which he named helium, the Greek word for Sun.

Born in Rugby, Lockyer started working as a civil servant and pursued his interest in astronomy on an amateur basis. He was elected a Fellow of the Royal Society in 1862, and his rising reputation as a solar physicist led him to be appointed in 1885 Director of the Solar Physics Observatory in South Kensington.

Lockyer made numerous major contributions to the rising field of spectroscopy. In 1868 he fitted a spectrograph on a telescope in manner allowing him to study prominences and the outer solar atmosphere on a routine basis (as opposed to only at times of total eclipse). He coined the name "chromosphere", still in use today, for the outer layers of the solar atmosphere. In France, Jules Janssen was simultaneously and independently proceeding along very similar lines and coming to similar conclusions. The following year, and this time working in collaboration with Janssen, Lockyer identified a chromospheric spectral line of a hitherto unknown chemical element. Helium was finally isolated in the laboratory in 1895 by William Ramsay, following which Lockyer was knighted.

In 1869 Lockyer founded the journal Nature, to this day one of the leading general scientific journals. He edited that journal for 50 years.

In the early 1890 Lockyer became interested in possible astronomical alignments of ancient Greek and Egyptian monuments and temples, and in 1901 he extended his studies to Stonehenge. Once approximate alignment of a given monument had been identified, he had the interesting idea to date the monument by assuming exact alignment at time of construction and interpreting the difference in terms of the precession of the Earth's orbital axis. His derived age of 1848 BC for the construction of Stonehenge was spectacularly confirmed much later, in 1952, by radiocarbon dating. Although many of Lockyer's hypotheses and conclusions were not universally well received and often did not survive the test of time, he is to be credited with founding the field of archeoastronomy.