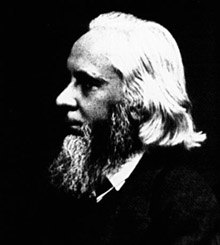 William Huggins was an English amateur astronomer who worked from his private observatory in Tulse Hill, London, became President of the Royal Society (1900–1905), and was a pioneer of astronomical spectroscopy. He and his colleague, William Allen Miller, were the first to analyze the composition of bright stars, comets, and novae. He developed spectroscopic photography and applied the Doppler shift of the spectral lines of stars to the measurement of stellar motion. He distinguished between nebulae that are uniformly gaseous and those that contain stellar clusters.

In announcing his and Miller's first spectroscopic results, in 1864, Huggins expressed the view that their discoveries provided:

... an experimental basis on which a conclusion, hitherto but a pure speculation, may rest – viz. that at least the brighter stars are, like our sun, upholding and energising centres of systems of worlds adapted to the abode of living beings.

While this was an overstatement, encouraged by theological belief, stellar spectroscopy would come to play an increasingly prominent role in the debate over the existence of habitable exoplanets, as would Huggins's discovery that some nebulas were composed of gas rather than stars and his early investigations of the nature of planetary atmospheres. In 1865, he established that the Moon possessed, at best, a negligible atmosphere by observing the spectrum of a star while it underwent an occultation by the Moon and noting that light of all wavelengths was cut off simultaneously.