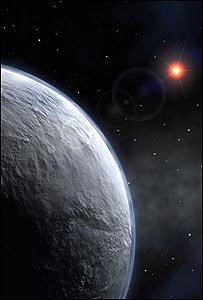 An exoplanet, or extrasolar planet, is a planet in orbit around a star other than the Sun. More than 4,000 exoplanets have been confirmed. Until recently, the great majority of exoplanets detected, with the exception of the pulsar planets, had small orbital radii and masses similar to or greater than that of Jupiter. This apparent bias arose simply because high-mass objects in compact orbits produce comparatively large effects on their host stars which put them within reach of the methods, and the sensitivity of those methods, currently available. However, over the past two or three years, more and more planets of lower mass – down to just a few times the mass of Earth – have been found.

The existence of giant planets in sub-Mercurian orbits (see epistellar jovians) and in highly elongated orbits (see eccentric jovians) has come as a surprise and forced theorists to revise their understanding of how young planetary systems evolve (see planetary systems, formation). The challenge now is to develop more sensitive techniques capable of finding Earth-class planets, especially those in orbit within the habitable zones of their host stars. These are potentially the most important worlds in the search for life, although, as in the case of Europa and Callisto, large moons of giant planets may also prove to be biologically interesting.

The discovery of (a) exoplanets around roughly 12% of the target stars searched (remembering that many lower mass worlds around these stars almost certainly await detection), (b) a planetary system in the case of Upsilon Andromedae, and (c) circumstellar disks around stars of widely differing spectral type, has led to heightened optimism that planetary systems are common throughout the Universe.

New techniques, such as nulling interferometry and the use of adaptive optics coronographs, are now being developed to the stage where they are capable of directly imaging exoplanets. Already, nulling interferometry has given astronomers their first glimpse of a dust cloud around Betelgeuse, while an adaptive optics coronograph at the Palomar 1.5-m telescope has enabled the first unambiguous identification of a brown dwarf, in the case of Gliese 229B. Direct imaging will become an increasingly important method for studying exoplanets. Firstly, unlike the radial velocity method, which is highly successful for discovering planets in orbits close to their host stars, imaging allows systems with larger separations (similar to those in the solar system) to be probed. Secondly, once objects have been resolved by direct imaging, it will be possible to examine their spectral features in detail and search for signs of life (see extraterrestrial life, detection). A variety of projects to image both Jupiter-like and Earthlike extrasolar worlds are under developments or planned for the future.