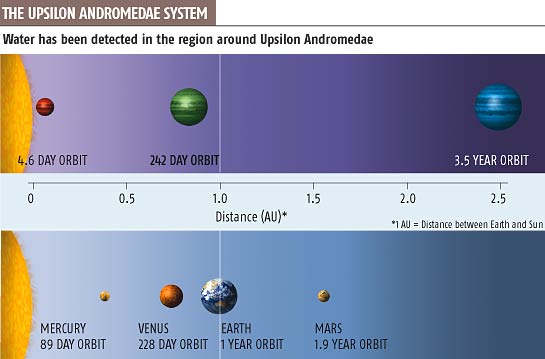 Upsilon Andromedae is a binary star system in the constellation Andromeda. The primary component (Ups And A) was the first main sequence star to have an exoplanetary system discovered around it. This discovery was announced in 1999 by a team from the San Francisco State University Planet Search (SFSU) group and independently by astronomers from the Harvard-Smithsonian Center for Astrophysics and the High Altitude Observatory in Boulder, Colorado, who had been studying the star for more than four years at the Whipple Observatory. Prior to this, only single exoplanets had been confirmed around Sun-like stars, together with two planetary systems around pulsars.

Upsilon Andromedae A is a yellow-white dwarf similar to the Sun but somewhat younger, more massive, and more luminous. Its age has been put at around 3.3 billion years (source: Geneva-Copenhagen survey) and the star has a metallicity (proportion of iron to hydrogen) roughly the same as that of the Sun. At around 1.3 solar masses, it will have a shorter lifetime than the Sun. The amount of ultraviolet radiation received by any planets in the star's habitable zone would be similar to the ultraviolet flux the Earth receives from the Sun.

Upsilon Andromedae B is a red dwarf of spectral type M4.5V located approximately 750 AU from the primary star. It was discovered in 2002 in data collected as part of the Two Micron All Sky Survey. The star is less massive and much less luminous than the Sun.

A planet, with about two-thirds the mass of Jupiter, was found around Upsilon Andromedae A by the SFSU group in mid-1996. This became the fourth known epistellar jovian, having an orbit that brings it seven times closer to its host star than Mercury is to the Sun. Three years later, two companions of larger mass were announced orbiting at about 0.8 and 2.5 astronomical units.1 As one of the SFSU researchers, Debra Fischer, pointed out, this important discovery "implies that planets can form more easily than we ever imagined, and that our Milky Way is teeming with planetary systems." The greatest surprise is the presence in one system of so many giant worlds. Theorists had only just begun to adjust to the idea of Jupiter-size planets in very small or highly elongated orbits. But this new triple-jovian system promised to cause an even bigger shake-up of ideas of planet formation. As to whether there might be life around Upsilon Andromedae, that is impossible to say at present. The star's age is sufficient for life as we known to have evolved; however, further study will be needed to establish whether any Earth-like worlds are present.