Fig 1. The powerful magnetic field of a pulsar directs two narrow beams of radiation into space.

Fig 2. The lighthouse beam action of a pulsar. 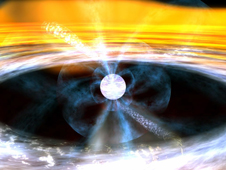 Fiig 3. Artist's impression of a millisecond pulsar. Isolated pulsars gradually slow their spins, but the opposite happens if the pulsar is joined by a companion star as part of a binary system. Gas accreted from the star can force the pulsar to spin faster, resulting in rotation periods of just a few milliseconds. Credit: NASA/Dana Berry. 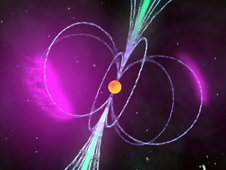 Fig 4. A new class of gamma-ray-only pulsars shows that the gamma rays must form in a broader region than the lighthouse-like radio beam. In this illustration, the pulsar's radio beams (green) never intersect Earth, but its pulsed gamma rays (magenta) do. Credit: NASA/Fermi/Cruz deWilde. 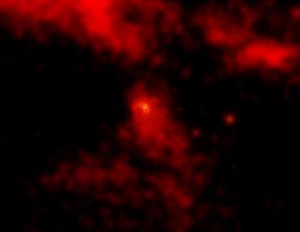 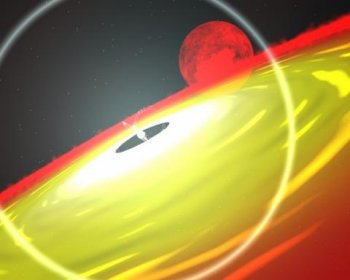 Fig 6. A neutron star centered in a disk of hot plasma drawn from its red companion star. Accreting material from the disk, the neutron star spins faster and faster emitting powerful particle beams and pulses of X-rays as it rotates 400 times a secOND. Credit: W. Feimer (Allied Signal), GSFC, NASA.

A pulsar is a fast-spinning, highly magnetized neutron star, formed (in most cases) following a supernova explosion, that sends out regular directional pulses of radiation as it rotates, in the manner of a lighthouse beam; the pulsar effect is seen if the beam happens to sweep in our direction. Pulsars were found originally at radio wavelengths but have since been observed at optical, X-ray, and gamma-ray energies; the first was discovered in 1967 by Jocelyn Bell Burnell.

About 2,000 pulsars are known. Most emit radio waves; of these, about 60 have also been observed to emit gamma rays. About 30 known pulsars emit only gamma-rays (see section "Gamma rays from pulsars" below).

Because rotation powers their emissions, isolated pulsars slow as they age. For example, the 10,000-year-old CTA 1 pulsar, which the Fermi Space Telescope team announced in October 2008, slows by about a second every 87,000 years.

The emission comes from the acceleration of electrons to near-light speed above the pulsar's magnetic poles, which are displaced from the object's geographic poles. Pulses last on the order of microseconds, while the interval between pulses, known as the pulse period, is typically 0.25 to 2 sec, but can be short as 1 to 10 millisec in the case of millisecond pulsars. The pulse period gradually lengthens as the neutron star loses rotational energy, though some young pulsars are prone to glitches, probably due to starquakes, when period abruptly changes. Precise timing pulses has revealed the existence of binary pulsars and of two pulsars that have sets of planet-sized companions (see pulsar planets).

The gradual lengthening of the period of a pulsar as it loses energy with age is known as spin-down. Observed spin-down rates range from 10-12 sec per sec for the youngest pulsars to 10-19 sec per sec for recycled pulsar. The Crab pulsar is slowing at a rate of 3.5 × 10-13 sec per sec. Occasionally a glitch occurs in the spin-down in which there is a sudden increase in rotation rate. This is thought to be due to a starquake – the equivalent of an earthquake where the crust of the neutron star settles a little bit, decreasing the radius and moment of inertia.

The discovery of millisecond pulsars, with pulse periods of less than 10 millisec (the current record holder is PSR J1748-2446AD with a period of 1.40 ms) was initially puzzling. The reason for this is that the youngest known pulsar is the one in the Crab pulsar with a period of 33 millisec. Since pulsars slow down with age, how could older pulsars have shorter periods? The answer is that millisecond pulsars have been "spun up," thereby becoming what are called recycled pulsars, by the transfer of matter from a companion. Almost all the 200 or so known millisecond pulsars have been found to be part of binary systems in which the partner is a white dwarf, the presumption being that the pulsars was rejuvenated by matter transfer while their companions were still in the red dwarf phase.

Although most pulsars are thought to form during supernovae, mounting evidence suggests that some originate as white dwarfs. Matter transfer is again the underlying phenomenon at work. If a white dwarf acquires enough mass from a close companion and doesn't somehow manage to get rid of it, as in a nova outburst, for example, it will eventually collapse to become a neutron star and may be seen as a pulsar.

The fact that, early on, most studies of pulsars were carried out at radio wavelengths tended to color our understanding of these objects. In fact, of all the energy radiated by a typical pulsar across the electromagnetic spectrum only a few parts per million is in the radio wave region. Much more of the pulsar's energy – around 10% – is given off in the form of gamma rays. Detection and observation of pulsars in this shortest-wavelength part of the spectrum has now become much easier thanks to orbiting observatories such as the Fermi Gamma-ray Space Telescope (formerly known as GLAST).

It used to be thought that the gamma rays emerged near the neutron star's surface from the polar cap, which is where the radio beams form. However, recent observations of the gamma-ray emission of pulsars, and the discovery of a new class of gamma-ray-only pulsars, has changed this view. Astronomers now believe the pulsed gamma rays arise far above the neutron star. Particles produce gamma rays as they accelerate along arcs of open magnetic field. For the Vela pulsar, for example, the brightest persistent gamma-ray source in the sky, the emission region is thought to lie about 480 km (300 mi) from the star, which is only 32 km (20 mi) across.

Existing models place the gamma-ray emission along the boundary between open and closed magnetic field lines. One version starts at high altitudes; the other implies emission from the star's surface all the way out. Future observations will hopefully determine which of these scenarios is correct.

Some pulsars have been seen to undergo an abrupt change in the tempo of their rotation – an event known as a glitch. The cause of pulsar glitches is unclear but there are two main theories. One involves starquakes, analogous to earthquakes but thought to be triggered by stress in the pulsar's crust caused by the strong magnetic fields inside it. Another possibility is that glitches are caused by a pulsar's frictionless superfluid interior spinning faster than its solid crust.

Pulsar timing noise is slight irregularities in the arrival times of radiation from a pulsar due to irregularities in the pulsar's rotation which are believed to be caused by changes in the extent to which the pulsar's super-fluid core is connected to its surface. In searching for pulsar planets, it is important to discriminate between possible effects due to timing noise and the more regular changes in a pulsar's period that may indicate the presence of a planetary companion.

A pulsar wind nebula (Fig 5) is a characteristic form, consisting of a bull's-eye ring pattern and escaping jets, that is taken by radiation and particles flowing away from some rapidly spinning neutron stars at the heart of supernova remnants (SNRs). The magnetic fields around the pulsar accelerate the particles, forming jets in the vicinity of the poles of the collapsed star and a ring flowing away from the pulsar's equatorial region. Pulsar wind nebulae have been observed in the X-ray region by the Chandra X-ray Observatory around several young SNRs, including the Crab Nebula, the Vela supernova remnant, and SNR G54.01+0.3.

An X-ray pulsar (Fig 6) is an X-ray binary in which the compact object is a neutron star with a powerful magnetic field that gives rise to regular X-ray pulses. These pulses are thought to be caused by the magnetic field channeling the accreting gas on to the poles of the compact star, producing localized hot spots that move in and out of view as the star spins. Hercules X-1 is an example. Anomalous X-ray pulsars (AXPs) make up an unusual subcategory.

An anomalous X-ray pulsar is a type of X-ray pulsar with a very long axial rotation period (for a pulsar), of 6 to 12 seconds, combined with a very powerful X-ray emission that cannot be explained by such a low spin rate. Two main theories exist to explain the anomalously powerful X-rays. In the first model, bits of gas blown off in the supernova explosion that created the pulsar fall back onto the remnant star, whose magnetic field is assumed to be no stronger than an ordinary pulsar's. As the gas collects on the surface, it becomes hot and emits X-rays. In the second model, which is now strongly supported by observation, AXPs are assumed to be magnetars – neutron stars with ultra-strong magnetic fields.