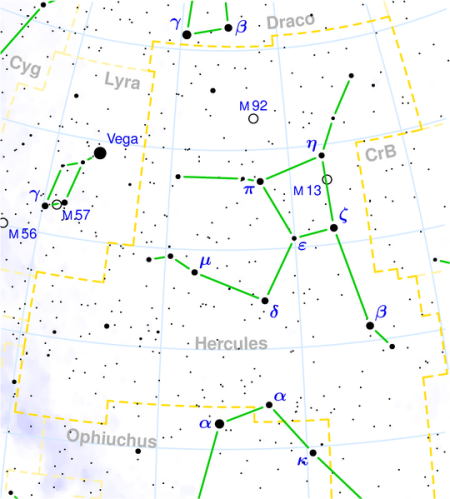 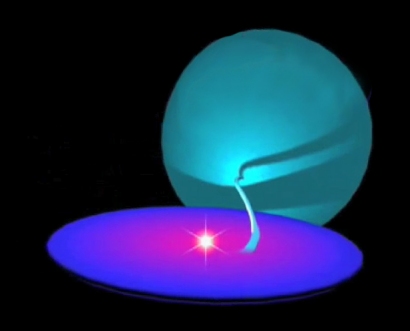 Hercules (abreviation: Her), representing the mythical hero famed for his 12 labors, is a very large but unspectacular northern constellation. It contains the Keystone asterism, named after its shape, which is made by four of the main stars in Hercules – Epsilon, Zeta (Ruticulus), Eta, and Pi Her. See below for details of the constellation's brightest stars and interesting deep sky objects.

Hercules X-1 is an X-ray pulsar that is a member of an eclipsing binary system with an orbital period of 1.7 days; it lies about 15,000 light-years away. The visible component has been identified as the blue variable HZ Herculis, whose spectrum varies from late A or early F to B. Her X-l has a pulsation period of 1.2378 sec, presumed to be its rotation period, and shows a 35-day quasi-periodicity in the X-ray region (but not in the optical). It is thought to move in a nearly circular orbit, to be accreting matter from HZ Her, and to have a mass of about 0.7 solar mass. The orbital period is stable, but the pulsation period is speeding up at a rate of about 1 part in 100,000 per yr. The X-ray eclipse lasts 0.24 days.